Nearly 2.5 lakhs Bank employees and officers working in nearly 30000 branches
in Public Sector and Private Sector Banks in South India -
Tamil Nadu, Pondichery, Andhra Pradesh, Telengana, Karnataka, Kerala and Lakshdweep -
struck work today at the call of United Forum of Bank Unions (UFBU)
demanding immediate and fair wage revision.
Bank staff from part time sweepers to the Chief Managers (scale IV) participated in this strike.
Nearly 2.5 crores of instruments amounting to app. 1.75 lakh crores remained uncleared
due to the strike.
The relay strikes will be held in NorthernZone on 03.12.2014, Eastern Zone on 04.12.2014 and western Zone on 05.12.2014 as per the call of the UFBU.


The Five year period last bilateral Settlement expired on 31.10.2012 and
the next settlement became due from 1.11.2012.
Even though two years have passed, the Government at the Centre and
the Indian Banks Association remain adamant not to concede beyond 11% of the
pay slip component consisting of Basic Pay, DA, HRA, stagnation increments, PQP, FPA etc.
The nine unions under the banner of UFBU initially demanded 25% increase
in the pay slip component and have come down to 23% with a view to have a
peaceful bilateral settlement.
But Govt. and IBA were obstinate not to concede anything above 11%.
Even after 13 rounds of discussions there is no improvement in the offer.
There are many other issues like pension updation, pension scheme similar
to the Central Government scheme, opportunity to switch over to the old pension scheme
from the new one, regulated working hours for the officers, five days banking etc. on the part of the employees and officers.
But the IBA instead of holding meaningful dialogue with the unions constructively,
insists upon anti-employees’ demands like CTC, variable pay, premature retirement
at the age of 55 years or after 30 years of service whichever is earlier,
free hand to transfer employees to any place in the State etc.
During this period between last wage revision and now,
the business mix of the Banks has gone up from 33 lakh crore rupees to 115 lakh crore rupees.
The gross profit increased by more than two folds.
More than 25000 branches have been opened.  Since last August more than 8 crores accounts
have been opened under the PradhanManthri Jan DhanYojana(PMJDY)for the
under privileged section of the people. Rupay debit card is being issued to them,
which entitle them with free one lakh accident insurance coverage,
Rs.30000 life insurance coverage and Rs.5000 overdraft.
But during this period, the number of staff has gone down by nearly 25000.
The implementations of this PMJDY scheme, the opening of newer branches
combined with reduction of number of staff have enormously increased the work load of
the bank staff.

The price rise is sky rocketing.  During the last two years, the consumer price index
has increased twice that of the period of 30 years between 1960 and 1990.
The bank staff are entitled for a decent wage increase.
Yesterday, there was a conciliation meeting between the Management of Banks
represented by Indian Banks Association (IBA) on the one hand and 10 lakhs bank employees
and officers represented by UFBU on the other hand before
Deputy Chief Labour Commissioner (DCLC) at Mumbai for whole day
between 11 am and 6 pm. It is to be noted that the wage rise during the last settlement
was 17.5% of the overall wage bill.  But during this conciliation meeting there was
absolutely no improvement offered by IBA beyond 11% of pay-slip component,
as they expressed that they did not have any mandate from the Central Government.
Thus this strike has been forced upon the Bank staff by the
Central Government and IBA combine.
Reports reaching from various parts of the State show that massive demonstrations
have taken place in more than 50 centres participated by several thousands of
bank employees and officers.

In Chennai there was massive demonstration participated by more than 5000 bank employees
and officers near Collector Office, opposite to Beach Railway Station.
The mammoth rally was chaired by C M Baskaran, convenor of UFBU-Tamilnadu,
greeted by E Arunachalam(AIBEA), Anadakumar (AIBOC), M  A Srinivasan (AIBOA),
C P Krishnan (BEFI) and Veerabadran (INBOC).

If the Government and the Bankers remain adamant in not conceding the
just demands of the bank employees and officers,
they will be left with no other alternate except to escalate the agitation
including observance of indefinite strike.
We regret the inconvenience caused to the customers during the strike days.
(C P KRISHNAN)
General Secretary 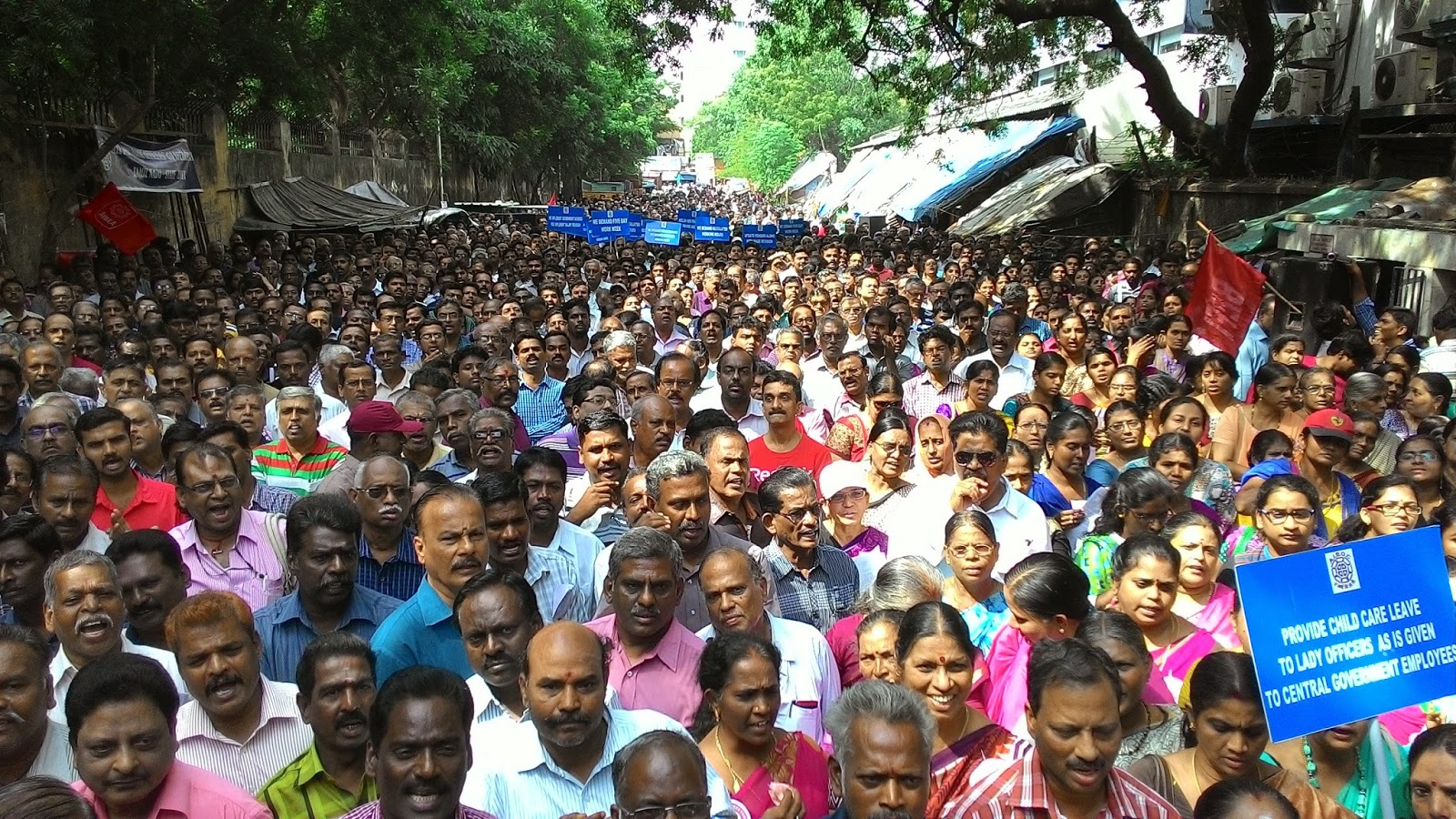 Indefinite strike will be the only solution for this issue.. and there will not be any effect on making one day strike that too region wise. I dont know what union leaders are doing....

In what terms u measure success by hampering business, one day salary deduction or improvement in wage hike by iba

Union leaders now time for you to show that you are not enjoy tea parties with government. So donot deduct our one day salary. It is time for you go for hunger strike as our country leaders .

25% in 5 years is a just demand. We should also be compensated for the financial risk that we take every day and for arbitrary transfers.

One union for all bank employees will make us success. These regional strikes will make loss of pay only.

For what you people are waiting ....go on indefinite strike....1 day strike will have no effect except our salary loss n increasing levy of unions ...

why union leaders agreed to do so called one day strike, why not indefinite, may we expect the result by that, why not the leaders think about it, "do or die'

Mr Kumar I would request you and unions to start negotiating for 11th BPS :-)
I don't understand your logic of High success of strike...It is the foolishness of the union to go on region wise strike. By now three regions have participated in strike and IBA is yet to respond. It is high time better opt for central pay commission... I and everyone who follow your blog expect a reponse from you.

Now it is our turn to expose the corrupt Bank MDs/EDs and other Top executives including the Govt. appted Directors and their misdeeds in writing off of debts/interests and scaling down of debts to corporate giants and Political clouts thro' the PRESS and MEDIA and make the public people to understand / and realize the TRUTH that how their hard earned money saved in PSBs have been mis utilised by those culprits mentioned above before going for INDEFINITE STRIKE. On 2 12 2014, in one of the Tamil popular channel (SUN TV) Mr. C H V from AIBEA participated in LIVE RELAY for one hour and explained to the public about the strike and the reasons forced us to go on strike and the adamant attitude of the IBA/Govt. The same has reached the public to some extent. I would like to suggest that all the zonal Union leaders should go to the public thro' MEDIA and PRESS MEET ETC. so that the public will not feel bad about the bankers.

Silly Strike.... IBA might be least bothered about it.