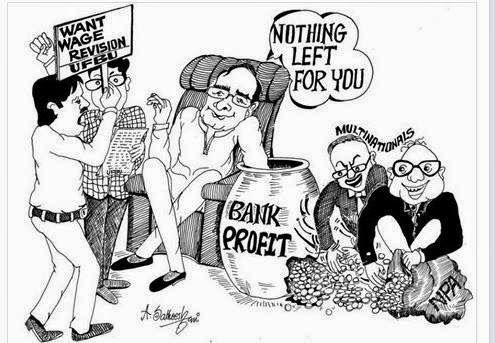 Write off to loan defaulters!

Nearly 50% of hard earned profit by 10 lakh  employees
is pocketed by Loan defaulters with assistant of policy makers.

It is stated in Parliament without any shy that Rs. One lakh crore was
written off in the last 5 years for Loan defaulters.

When Bank employees demand for wage increase,
the same policy makers say "Sorry, no money to give"

Ther is no other go for employees to sing the song well known to them.
That is " Struggle, Struggle and Strike"


THIRUVANANTHAPURAM, DECEMBER 22:
Reserve Bank employees have decided to observe a strike on January 7, 2015, in solidarity with the cause of the United Forum of Bank Unions in the commercial banking sector.
The All-India Reserve Bank Employees Association and the All-India Reserve Bank Workers’ Federation have urged the RBI Governor to intervene to bring peace in the banking sector, stating that the RBI cannot remain a mute spectator.
The Association and Federation advised units to observe peaceful and organised action in all RBI offices and liaise with units of the United Forum in the run-up to the strike.
“We have got an important stake in bank employees’ success and achievements. Their settlement has provided us the basis of our wage negotiations, which are pending,” said Samir Ghosh and SV Mahadik, RBI employee union leaders.
Read more »
Posted by Indian Bank Kumar at 3:49 PM 6 comments:

One comrade posted a question:
Indian Bank Kumar
Come out of shadow. Be not afraid.
Reveal your identity and your objective.
Others deserve to know it.

My reply:
Nothing to hide.
I am also a bank employee like every one of you.
but I am more interested in union activities.
I am not a union  leader.
My objective is to pass on all the information
I am reading/receiving( taken from websites of all unions)
and also thro e-mail. .
I am answering doubts/queries raised by comrades
with my little knowledge( read from settlements and various circulars.)  and my experience.
I am not posting anything without authencation.

Why one day strike and then 4 days strike?

AIBOC reveal in their circular ..........
Comrades, we have been receiving lot many queries about the decision of single day strike of 7th January, 2015.
We would like to inform the background which led to the decision of one day strike.
IBA, vide their Letter No. CIR/HR & IR/XBPS-1/996 dated 2nd December, 2014,
had advised the member banks to update their respective Boards on the present status
of the wage negotiations developments, its financial implications and if felt necessary,
revisit the mandate.

This being a very serious development was discussed in the Working Committee Meeting of Confederation held on 8th December, 2014, at Delhi.
The Central Office drafted a letter and sent to all its Affiliates for onward submission
to the Management of the respective Banks to thwart IBA’s tactics of delaying Wage Revision
and also to obviate the possibility of tinkering with the earlier mandate.
It was also decided that the same stand would be taken by our Representatives on the boards,
when the agenda comes for discussion.

On 17.12.2014, the adjourned sitting of the conciliation proceedings was held by Dy.C.L.C.[C], Mumbai at his office with the Nine constituents unions.
AIBOA was represented by Com.M.A.Srinivasan, Dy.General Secretary and Com.Narendra Kotiawala, Joint Secretary and General Secretary of AIBOA[Maharashtra].

2.         It is a matter of concern to all the organisations that IBA, never before  attempted to go back to the individual Banks to revisit the mandate given by them to IBA in the matter of wage revision.
Dena Bank and Andhra Bank managements had placed the agenda for the information of their respective Boards.
The action of the IBA is highly provocative.
IBA’s managing committee  is proposed to meet on 29.12.2014 to take the stock of the situation.
Read more »
Posted by Indian Bank Kumar at 10:52 PM 3 comments:

Press Statement issued by C P KRISHNAN, General Secretary,
BEFI-TamilNadu
Ten Lakhs Bank Employees and Officers launch
Indefinite strikefrom 16th March 2015
****************************************************
The wage revision of the Bank employees and officers has become due from
November 2012 as the earlier Five Year Settlement expired on 31.10.2012.
The charter of demands has been submitted well in time and so far 15 rounds of
bilateral negotiations have been conducted between UFBU (United Forum of Bank Unions),
an umbrella organization of Nine Unions of workmen and officers representing
98% of the work force and IBA (Indian Banks’ Association),
the body of the Management of all the Banks.

So far Five days Strike have been observed in

National Organisation of Bank Workers - NOBWToday at 06:01 · A deligation of NOBW and NOBO under the leadership of Sri Lakshma Reddy VP B M S today met with Hon'ble Labour Minister and requested for intervention in deadlock of Bank Employees' wage revision.Minister assured to intervene in the forthcoming Conciliation meeting with DLC Mumbai scheduled for 17th Dec and advice the concerned accordingly.

AIBEA circular dt.12.12.2014 says………………..
10th Bipartite Wage Revision Settlement……………it has been decided that having regard to the various developments around us, it is advisable to conclude the settlement at the earliest and for this purpose a practical approach should be adopted by the Office Bearers / Negotiating Committee while aiming to achieve a reasonable and adequate increase in wages and improvement in service conditions keeping the priorities outlined by our Wages Sub-committee and approved by our Central Committee.
Unfortunately, having regard to the views of different constituents of UFBU, such a position has not emerged so far. In the meantime, besides maintaining an adamant posture in the negotiations, IBA has also written to all the Banks seeking their views on a possible revised mandate which is wrought with serious implications.
…………………..we learn that while UFBU is dealing with the issue, and a meeting of the UFBU is slated to be held on 17th December to take further course of action, 4 Officers’ Organisations including AIBOA have announced some separate agitational programmes commencing from 16th December.  Earlier also, one of the constituents had announced separate programmes. We feel such steps would weaken the common endeavours.
……………………..In this background, our AIBEA Office-Bearers are meeting in Mumbai on 19th & 20th December, 2014 to take a review of all these disturbing developments and to take appropriate line of action for achieving early and better wage revision.
We are sure that our units will understand, appreciate and co-operate………..

Dear Comrades,
 ADAMANT ATTITUDE OF IBA – GOVERNMENT COMBINE
 FURTHER PROGRAMMES TO FOLLOW
 WARM UP EXERCISE TO COMMENCE FROM 16.12.2014
Please refer to the discussions held in Working Committee Meeting of our
Confederation held on 8th December, 2014, at New Delhi, wherein, a decision was taken to
chalk out programmes to intensify our struggle. Accordingly, the undersigned had a detaileddiscussions with other three Officers' Organisations for a common progamme which can be implemented by all the four officers’ organizations.
We are pleased to inform that a consensus has been arrived at for a common programme.
A joint communication has been issued by all four Officers' Organisations in this regard which is appended here in below:
QUOTE:

12th November 2014, an All India Stay out Strike by the entire workforce had evoked
no response from all concerned in the Industry. Forced back to the wall, Association/Union
representatives responded to the call of conciliation by Deputy CLC [C] on 01.12.2014 at
Mumbai, maintained a reasonable stand to commence the negotiations by IBA.
Even to facilitate the IBA to eke out an assurance from the Government authorities, we agreed to meet at 16.00 hours after a brief adjournment.
Read more »
Posted by Indian Bank Kumar at 12:05 PM 32 comments:

“Revolutionary Salutes to all our constituent Units and the membership in toto – The Relay Zonal Strikes started from 2nd December 2014 to till date have seen unprecedented success, displaying the anguish and frustrati on of the bank employees, who are being d enied the reasonable wage revision and also the undue delay on the part of IBA in conclusion of the settlement.

We already informed in our earlier circular about the total success of Relay Zonal Strike observed in Southern Zone on 2nd instant, which had paralysed the banking services throughout the Southern Zone.

We are glad to inform that the Relay Zonal Strikes on 3rd December in Northern Zone, on 4th December in the Eastern Zone and today in the Western Zone, have also ended in grand success.

Nearly 2.5 lakhs Bank employees and officers working in nearly 30000 branches
in Public Sector and Private Sector Banks in South India -
Tamil Nadu, Pondichery, Andhra Pradesh, Telengana, Karnataka, Kerala and Lakshdweep -
struck work today at the call of United Forum of Bank Unions (UFBU)
demanding immediate and fair wage revision.
Bank staff from part time sweepers to the Chief Managers (scale IV) participated in this strike.
Nearly 2.5 crores of instruments amounting to app. 1.75 lakh crores remained uncleared
due to the strike.
The relay strikes will be held in NorthernZone on 03.12.2014, Eastern Zone on 04.12.2014 and western Zone on 05.12.2014 as per the call of the UFBU.
Read more »
Posted by Indian Bank Kumar at 10:26 PM 13 comments: