ALL INDIA BANK PENSIONERS AND RETIREES CONFEDERATION
Camp Office: J 208, Vijay Rattan Vihar, Sector 15 Part II, Gurugram 122001 Mobile: 9868220338   Email: acharyavedavyasa46@gmail.com
Dated: 24.06.2020
P R E S S    R E L E A S E
All India Bank Pensioners & Retirees Confederation, an apex organization of the Bank Pensioners & Retirees – both Public Sector & Private Sector Banks which is an apolitical & independent organization promoted by All India Bank Officers Confederation appealed to its members to voluntarily contribute towards PM-CARES FUND, so as to become a part of COVID19 WARRIORS in our nation’s fight against global pandemic.
Responding to the call of the confederation, the members voluntarily and liberally contributed for the noble cause and the total contribution of Rs 2.12 Crores was perhaps the highest amount of donation by any organization of the pensioners in the country.
A delegation of the senior officer bearers of the confederation lead by Shri. K.V.Acharya, President , accompanied by Dr.J.D.Sharma, Vice President, Shri. D.K.Hans, State Secretary, Delhi, Shri. A.K.Nagar, President, Delhi State and others called on Shri. Anurag Singh Thakur, Honourable Minister of State for Finance and handed over a Bank draft for Rs 2,11,79,966/- (Rs Two Crores Eleven lacs Seventy Nine thousand Nine hundred and sixty six only) to him at Delhi.
The noble gesture by the Senior & Super Senior Citizens of the Banks is a reflection of their concern, compassion & commitment for the society, more particularly the economically weaker sections and unorganized labour affected very adversely by the outbreak of coronavirus.
K.V.Acharya                                            President, AIBPARC
S.Sarkar
General Secretary, AIBPARC 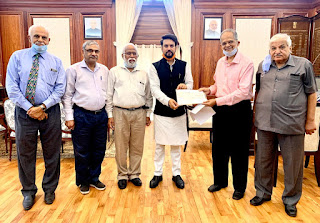 Posted by Indian Bank Kumar at 9:16 PM No comments: 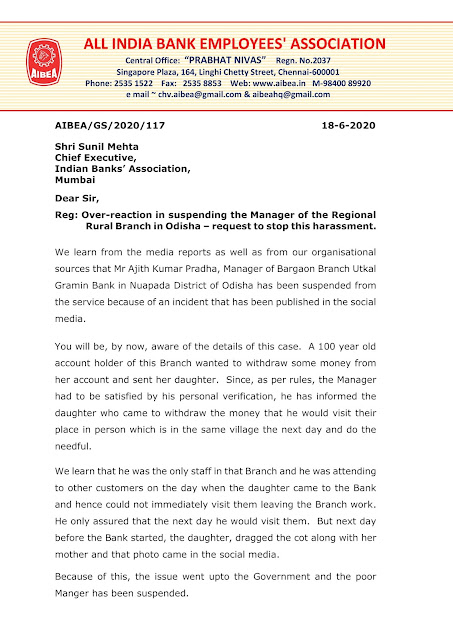 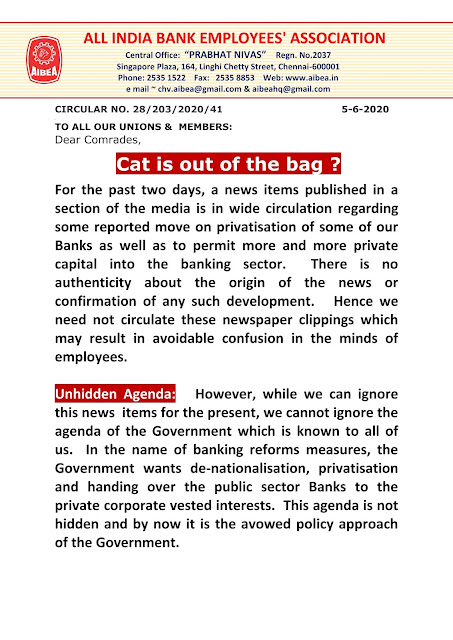 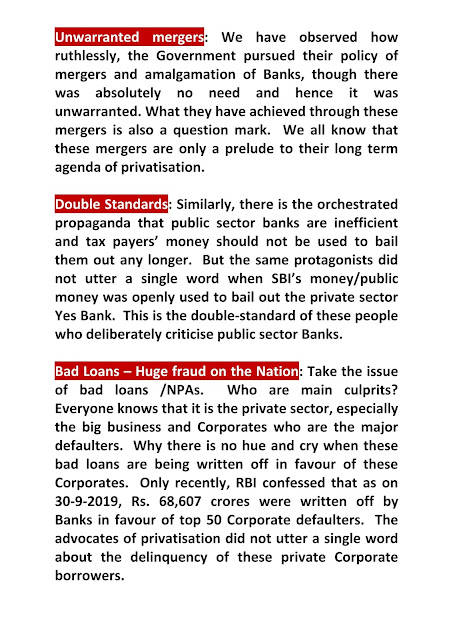 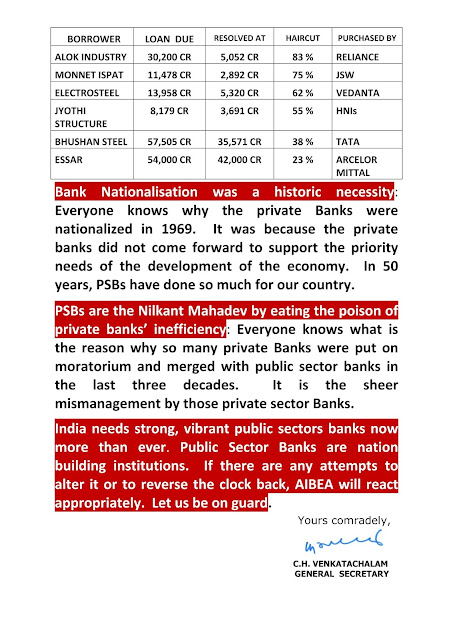 We came across reports published in print and electronic media recently stating that the Govt. of India has started discussion on privatisation of public sector banks (PSBs). Reportedly,  this is being undertaken at the instance of ‘Niti Ayog’, the Govt. think tank whose suggestions include allowance of ’long term private capital’ in the banking sector, besides provision of banking licenses to select industrial houses. Although decision is yet to be taken in regard to privatisation of PSBs, the media further reported that the considerations at present include Indian Overseas Bank; Punjab & Sind Bank and Bank of Maharashtra which were left out of the 10-bank-merger effected from 1st April 2020.

We are all aware that since adoption of New Economic Policy in 1991; successive Governments at the Centre, in the name of banking sector reforms, formed many Committees whose tailor-made recommendations were ultimately aimed at privatisation of public sector banks. In the face of uninterrupted movements of the bank employees’ organisations, the Governments were compelled to hold their decision of privatising the PSBs. With the NDA-I Govt. coming into power in 2014, the reforms measure gained momentum when number of public sector banks was reduced to 12 till now from 27 through different process. While 14 banks were merged/amalgamated with other PSBs; IDBI Bank had been listed as private sector bank subsequent to forced acquiring of 51% stake by the LIC of India.

We all understand that a myth is being created about private sector banks when many of these are suffering from inherent problems. Many private banks, facing serious problems, were taken over by PSBs to safeguard interest of the depositors; IDBI Bank is first instance of privatisation of a public sector bank since bank nationalisation fifty years ago. We are aware about recent crisis of Yes Bank, the fourth largest private bank of the country, where RBI, in the interest of its customers and depositors, had to supersede and suspend Yes Bank’s board as a result of huge amount of bad debts. State Bank of India invested Rs 7250 crore in the bank amid financial crisis holding 49% stake in capital of the bank. Several Cooperative banks and non banking financial companies (NBFCs) are also facing serious crisis nowadays. The PSBs are not confined to save the banks and financial companies but are also taking care of business houses in other sectors of economy including aviation sector.

The country’s fragile economy is facing unprecedented crisis in the situation of Covid-19. Several measures have been announced by the Govt. and Reserve Bank of India. All these measures are supposed to be implemented mostly through the public sector banks. The merger of 10 public sector banks effective from 1st April 2020 have already posed serious problem in discharging responsibilities for revival of economy amid overall crisis and privatisation of public sector banks, if taken up, will further damage the process of relief measures. It is reported in the media few days ago that the private banks garnered smaller share of incremental deposits raised by the banking sector in 2019-20 following the crisis in PMC Bank and Yes Bank which shook confidence of the depositors. Hence, consideration of privatisation of PSBs is also against the interests and sensitivity of the common people of our country in general.

We don’t consider this as an isolated agenda. Ever since NDA Govt. re-elected in 2019; it is aggressively advocating for large scale privatisation of public sector enterprises of the country. The Govt. of India, taking full advantage of national lockdown hastily pushing through its neo liberal agenda taking several steps against the interest of the country and its people. The Union Finance Minister while announcing relief package announced that in strategic sector, maximum four public sector enterprises will remain while the rest will be privatised or closed along with those in non-strategic sector. We have already mentioned that though the FM reportedly told that this decision is not applicable to banks but we should not be complacent. Now, reports of privatisation move are pouring in justifying our suspicion regarding ill motives of the Govt.

BEFI has been associating itself with broader democratic movement and the movement of the working class of the country since initiation of new economic policy. We are of the firm opinion that the bank employees’ movement should be closely associated with  movement of the working class against Govt. policies along side organising  sectoral movement. The Central Trade Unions have already organised protest movements suitable to the present situation; while discussions are on to organise big protest demonstrations once the lockdown period is over.

We feel that there is necessity of taking the issue jointly at the apex level; till then we should try to make the employees and customers aware regarding the ominous stance of the Govt. In the prevailing situation, we call upon our State Units to organise protest demonstrations against Govt. moves taken to weaken the public sector banks of the country with an ultimate aim of privatisation. We advise to hold these demonstrations preferably in front of main/prominent branches/offices of Indian Overseas Bank at all cities in consultation with our affiliates  therein at the earliest; following the advisories/restrictions issued for Covid-19.