*"NO PENSION REVISION FOR BANK EMPLOYEES DURING PAST 26 YEARS".*

Tere are also sub tities such as

The news translated into English:

The reason given by the banks for non-revision of pension is that there is insufficient balance in the fund. The fact that there will be sufficient amount in the pension fund even if employees pension is doubled now has come to

The Total amount disbursed as pension in the

The interest earned in the corpus fund during the same period was Rs. 18400 crores.

in the pension fund is sufficient to disburse pension to all pensioners. There are 6.91 lakh pensioners as of now of which 1.20 lakh are family pensioners.

Bank managements have to transfer 10% of

year. During the last two years six banks have not

transferred even a single rupee to the fund.

Not only that they have also not made any provision for

this in their balance sheets

Employees are facing a dangerous situation due

retired in 2002 is receiving lesser pension than a

It is the family pensioners

who are facing maximum difficulties.

In 1993 when pension was introduced the family pension was fixed at 1596 the salary at retirement Central government is paying farrily pension at 50% of the pension drawn by pensioners.

*RS. 3445 CRORES, FROM PENSION FUND SPENT FOR OTHER PURPOSES:*

in 2017 and another Rs. 2620 crores in 2018 from the pension fund for other purposes. Bank has admitted in their written reply that these amounts

were not withdrawn for pension payment. It is not

clear which are the Lother banks that have utilise pension fund for other purposes like this."

Even though salary of public sector bank employees had been revised five times since 1993, Pension has not been revised even once. 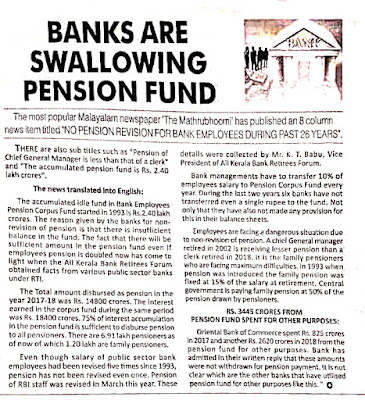 It is a dangerous situation. If public sector banks can divert the pension fund other than the benefit of the pensioners, what will be the situation, once few of them comes under private management (as actively under consideration by the govt.). The pension fund will be subjected to PRIVATE LOOT.

Its high time. All such pension trust should comes under PFRDA and there should be transparency and all transactions related to pension fund should be made available in public domain for information to all.