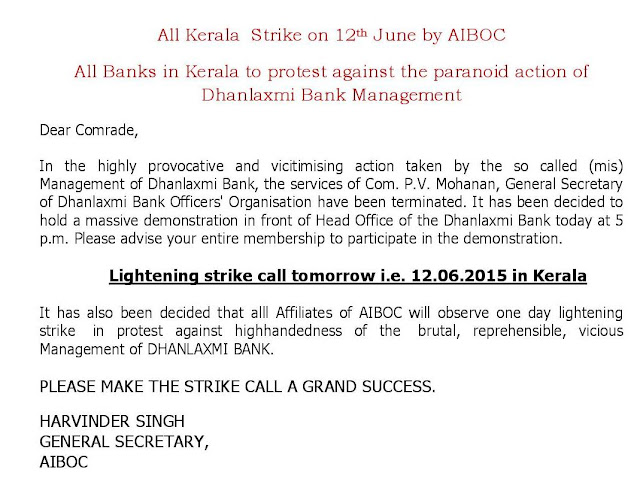 What is going on in Dhanalaxmi Bank?
Victimized for legitimate trade union activities and whistle blowing certain irregular activities of the Management.
Yes, General Secretary of AIBOC union in Dhanalaxmi Bank has been dismissed.
AIBOC circular says.........
Our Affiliate, Dhanalakshmi Bank Officers Organisation(DBOO) is on the war path
following an acute Industrial Relations crisis, that has been persisting in Dhanlaxmi Bank
since one year.
Attempts made by the DBOO to settle it through negotiations failed, owing
to the adamant stance taken by the Management. Even after the intervention of the
National and Kerala State Unit of AIBOC, bilateral talks have not been fruitful. The
management of the Bank, violated the settled terms and refused to sign the ‘minutes’ even
after the discussions were concluded.
Beyond these apparent reasons, there were serious problems inside the Bank which
were suppressed by the Bank. The Dhanlaxmi Bank’s Management and the DBOO fell out
after our affiliate resorted to a whistle blowing to expose a high value fraud in one of its
Mumbai branches. This act of DBOO was contrary to the Management’s interest, and ever
since then the Industrial Relations got strained. A huge scam got unearthed subsequently
but the involvement of the higher officials was suppressed carefully. Our affiliate has
reported that an officer (Scale I) has been implicated in the fraud and is in Mumbai jail
since 1 ½ months. On the other hand the real culprits, alleges our affiliate, walk free. The
office bearers of DBOO have been victimized for whistle blowing and the General Secretary
of the DBOO even faces a threat of life.
Our affiliate also demanded a forensic audit into the scam and also in all
appointments the Bank has been making indiscriminately in the last 2 years. So the main
demand is : STOP VICTIMISATION OF WHISTLE BLOWERS.
OTHER DEMANDS :
• Stop human rights violation activities in the Bank (including a gender issue), punish
the culprit who perpetrates such crimes,
• Respect bilateralism, settle other internal issues without any further delay,
• Withdraw all victimization transfers and stop denial of eligible transfers of officers,
......many other demands. 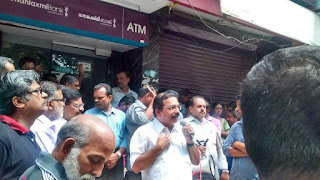 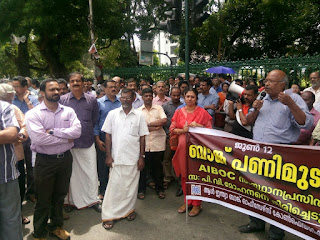 since more than 15 months. I have been voicing through several means and modes about strict practice of banking rules and regulations that have been mannualised long long ago, by every officer, in every branch of every bank and every office of every bank. Close watch by every officer on co-officers' working style, body language and whistle blowing are required in time to safe guard organisation's interest in general and self job's protection in particular. Else, issues get precipitated. With underpaid jobs in banks and ever increasing cost of living, cost of education, cost of health management, unscrupulous tendencies are setting in. Due to the acts of very FEW, many honest Officers in banks are suffering. Tension ridden atmosphere is being reported by any young officers from many banks. The remedies are well known and well written in many many Personnel Management's standard books. Few of them are : Periodical Training, Periodical Inspections without any compromise, Reading of CC cameras' footage, strict adherence of Vigilance norms and regulations,adequate Salary and Allowances, congenial atmosphere at working place. AIBOC must change it's guard. For, Xth BPS is the latest evidence. Just 2% of mere 15% for New Pay Scales, as advocated by many, would result into severe corruption, quid pro quo deals. CBI / CVC's deep probe/investigation is hihgly recommended. All honest Officers are cautioned and requested to safeguard themselves with proper A & v recording of misdeeds of either colleagues, subordinates and superiors. For their promotions and tempting incentives, unrealistic approaches are said to be setting in on several young officers by their superiors and their superiors which may land them in trouble in due course. Print media and electronic media, free lance journalists must extend support to honest Officers of all banks. If evidences are properly and timely recorded, the suffering honest officers should never hesitate to upload them to The CBI / The CVC / The Chief Justice, Supreme Court under copy to the print media / electronic media. Nowadays, honest journalists too are being killed by wrong doers. But, let us be strong and bold and tackle this menace. Let us support this present cause in DLB. Let honest and sincere Officers get justice and protection. May their family members live in peace.

unity and union is limited to books and offices only, no one has time to scratch his own parts, no one has feeling for others sufferings or difficulties . every one wants to make his own position comfort and own hands clean. Future of banker is in dark he is abused by cutomers,scolded by management and wages curtailed strategically by government under the wrecked directions of IBA officially who are paid and previlleged enormously