7th Pay Commission hikes notified: The hike will result in increase in salaries in the range of Rs 7000 to Rs 18,000 per month. (PTI Photo)

Clearing the final hurdle towards payout of the 7th Pay Commission hike in salaries, the government has issued notification giving effect to the panel's recommendations. The notification was issued on Monday.


The notification comes nearly a month after the Union Cabinet on June 29 cleared the Commission's recommendation on salary hike.

The 7th Pay Commission hike will result in increase in salaries in the range of Rs 7000 to Rs 18,000 per month.

Starting salary of new government employees will be a minimum Rs 18,000 at the lower levels whereas starting salary for Class-1 officers will be Rs 56,100.

The hike has been determined according to a fitment factor of 2.57 applicable for pay revision of all employees. The rate of annual increment has been retained at 3 per ent.

Arrears, which is to be paid from January 1, 2016, will be credited to the government employees within financial year 2016-17.

While giving clearance to hike in salariees, the Union Cabinet had also decided set up committee headed by the Finance Secretary to look at the 7th Pay Commission recommendation on allowances. The panel will submit its views within 4 months. Till the time the committee provides its views, government employees will continue to get allowances as per existing levels.

The govermment has estimated that the total burden on the exchequer on account of the 7th Pay Commission recommendation would be Rs 1.02 lakh crore in 2016-17. There will be an additional impact of Rs 12,133 crore on arrears and of salary and pension for two months of 2015-16. 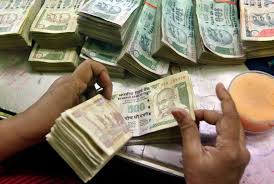 Look at the difference between the sal of central govt and we bankers. ThE lowest wage for govt employment is 18000 where as lowest wage for us bankers is 5400. Newly recruited officer will be drawing 51000 but we bankers would pay only 31000. Why is there a huge difference in these wages? There was a time when people left central govt jobs and joined banks as the pay here was more. What has happened to us ? Where are we heading ? When the lowest salary for central govt job is 18000 which is merely 3000 less than what a newly joined clerk in banks would draw is just mind-boggling. Where did we loose track?

We are the labours don't compare with the officers of state and central government.

When will Bank employees gratuity be enhanced to 20 lakhs