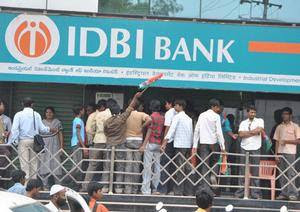 IDBI Bank employees and their family members took en masse to Twitter on Sunday to continue with their protest against the move to dilute the Centre’s stake in the bank, as announced in the Budget.
The tweets started after the intranet blog of the MD and CEO was closed for comments on Saturday after the staff members wrote some 7,500 protest notes post the dilution announcement.
For two hours around Sunday noon, ‪#‎saveidbibank‬ was in the top five trending list. Tweets were sent to the pages of the Prime Minister, the PMO, and the Finance Minister, among a list of top policymakers.
Other hash tags included ‪#‎stopprivatisationofidbibank‬, ‪#‎arrestvijaymallya‬,‪#‎recovernpas‬, ‪#‎dontsellindia‬, ‪#‎dontsellfamilysilver‬, and ‪#‎PSBisnational‬asset.
Being the youngest and tech-savvy public sector bank with an average employee age of 32, it was natural for the staff to take to Twitter, according to a representative of the employee union.
In a way, it helped them reach out to the world at large as the intranet blog of the MD and CEO limited the reach to one another while logging into the company’s private network.
Twitter also helped family members of the staff to tweet against the move to privatise the bank, the representative said.
According to him, this marked a first in trade union members taking the technology route to protest against what he called a ‘wrong policy decision’ that ‘threatened’ their job prospects.
The Hindu Business Line
Posted by Indian Bank Kumar at 11:50 PM

NPA in BANKS, Write off,Dividend payment is Loot of public money, Provisioning for Bad loans is the money earned by Bank Employees,Where is Brave UNION Leaders.Not a single voice from any union leader Really it is the last nail in the coffin of BANK UNION. Big failure of any Union in the history of world,even after backed by one million BANKERS. It means silent support of unions for Loot of public money.

good and nice information thanks for sharing