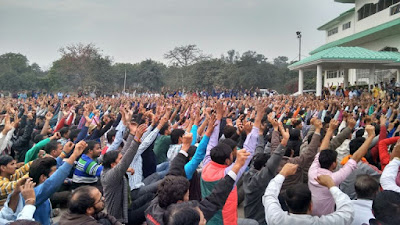 The Massive Honda Workers’ Protest That Media Doesn’t Care About: A Detailed Report

March 5, 2016
This significant struggle/situation has been wiped out from the media, except for some references in the business press.

The struggle of 3000 Honda Motorcycles and Scooters India (HMSI) workers of Tapukara plant in Alwar, situated at Haryana-Rajasthan border, in the face of brutal repression from the management-police-administration side, has emerged as an important and intense workers struggle at the present time. As the workers saw commonality and forged unity across internal segmentation, initiated the process of Union formation on 6 August 2015 and submitted a collective Charter of Demand on 14 December 2015, they faced attacks in various forms. It included a criminal conspiracy by the Management to suppress the workers collectivity and Union process using deceitful legal and manifestly illegal means via labour department and the Court, transfer-suspension-termination of Union leaders and retrenchment of around 800 active contract workers.

On 16th February, 2000 workers across categories of permanent-casual-trainee-contract came together to stop work and do a sit-in strike inside the factory. The immediate reason was an Executive Engineer physically attacking a contract worker in the Paint Shop, forcing the physically unwell worker to work overtime for the fourth consecutive day. Long standing demands of reinstatement of terminated workers and ceasing management attacks on Union formation were stated. The same evening, instead of any negotiation, the workers leadership was immediately abducted and at the behest of the management, the assembled workers were brutally lathi-charged and repressed by Joint Police forces of Rajasthan and Haryana combined with illegal bouncers, Continuous arresting, hounding, and slapping false cases ranging from attempt to murder, rioting to looting, is going on.
At present, over 2000 workers have not returned to work, the management is sending mass suspension letters to hundreds of workers, as they bring in contract workers from far-away states to illegally resume production at the cost of workers livelihood. But production continues to drop to a few vehicles from the daily normal output of 5000 units.

This repression from the management-police-administration comes as an expressed move to suppress the workers legitimate right to Union formation and collective bargaining, right to permanent jobs, respect and dignity at/of work, and more importantly, the emerging collective strength and subjectivity of workers in the factory and beyond. Even as company profits are soaring to record heights, this repression is to facilitate the continuing unabated exploitation of an insecure and unorganized workforce forced to work, work, and work more without relief, in the underbelly of new industrial regions (like in Tapukara-Khushkhera-Bhiwadi-Neemrana-Bahror) and industrial corridors under ‘Make in India’ through a coercive surveillance and militarized regime.
Posted by Indian Bank Kumar at 6:28 PM

This is USA AND ALLIED CAPITALISTs DO.sudden love n praise of India is because of cheap labour available through state created unemployment.God save the workforce of this country. Especially group c jobs.

No one knows the reality. My friend works in Honda an engineer. The workers behave like goons and hit permanent employees at will. There should be hire and fire policy. Companies keep contractual workforce to check the blackmail by these goons. And please don't strive to put unions in good light, always. Unions are not holy cows. they are the reason for the pathetic conditions. Workers will be more happy if these filthy, uncouth, unscrupulous unions go out of business.