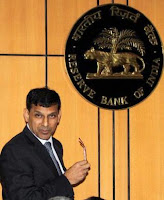 Rajan's right: Govt should compensate PSBs,
not use them as extended arms!!
(by Dinesh Unnikrishnan Aug 28, 2015 FIRSTPOST)


This time, the former chief economist of International Monetary Fund (IMF)
has raised another issue of critical importance in the Governor’s overview
section of RBI’s 2014-15 annual report. The issue pertains to how public
sector banks (PSBs) are forced to undertake government’s financial inclusion
programmes, such as the Prime Minister's Jan Dhan Yojana, without getting
fully compensated for their losses.

"We should recognise that PSBs undertake public interest activities (like the
roll out of accounts under the Pradhan Mantri Jan Dhan Yojana) that are not
always fully compensated," Rajan said.

Surely, there are no two thoughts on the need for promoting financial
inclusion in the country, where nearly half of the population is unbanked
and, many of them, are highly dependent on private money lenders to fulfill
their financial requirements.

Opening a bank account is the first step to introduce someone to the world
of formal finance. In that sense, Jan Dhan has done a commendable job.
But, as Firstpost has highlighted earlier, the problem with Jan Dhan roll out
was its rocket-speed implementation model. State-run banks were given
unrealistic targets to be achieved in a painfully short span of time, putting
pressure on branch level officers to resort to all sorts of tricks to get new
account holders.

In the process, substantial chunk of duplicate accounts were opened, where
the same customer opened different accounts using different identity proof
documents. Also, banks probably didn’t get enough time to reach the
customer, who actually needed a bank account. Although, eventually these
accounts will be linked to Aadhaar, the duplicate accounts will not vanish in
a day or two. Banks will have to carry the cost burden on these accounts.
Similarly, inoperative accounts too would add to their maintenance cost.
Though the government initially promised to compensate PSBs, the promise
has so far remained on the paper. This is where what Rajan said makes
immense sense. "Government should endeavour to keep the competitive
playing field level by fully compensating banks for activities it wants
undertaken in the public interest," Rajan said.

The onus of carrying out (loss-making) financial inclusion activities has
largely been the responsibility of state-run banks, while past evidence shows
that private sector banks have largely stayed away from this segment,
unless they are forced by regulation to lend to the poor and operate in the
high-risk segments (such as the priority-sector lending obligation). This
creates a lack of level-playing field for state-run banks. Clearly, that
shouldn't be the case. The government should ensure that the same rule is
applicable to all.

When government forces state-run banks to carry out financial sector
activities, but refuses to fully compensate them, that creates distortions in
their business. The Jan Dhan accounts have been opened at much higher
cost than originally estimated. According to Indian Banks' Association (IBA),
the average cost for banks opening Jan Dhan accounts and maintaining
them with benefits will be Rs 140 per account as against the earlier
estimated Rs 80.

Also, by refusing to compensate banks fully, the government is also
contradicting its own stated objective of changing India’s state-run banks as
profitable entities. The recently announced ‘Indradhanush’ package, which
outlines a seven-pronged strategy to improve the performance of PSBs,
stipulate performance efficiency targets to these lenders. In future, the
state-run banks will be rated based on their performance.
But, when the level-playing is absent, how can government
expect sarkari banks to perform well competing with their private
counterparts? The issue is not just about Jan Dhan like schemes but also
about forced lending to certain specific segments such as agriculture, where
banks are given annual targets.

Remember this isn’t the first time Rajan has raised the issue of unfair
treatment of state-run banks by the government. In September last year,
Rajan had come down heavily on such practices.
Implicitly referring to the Jan Dhan Yojana Rajan had said if the government
gives a mandate to public sector banks to further its social sector agenda,
the government itself should fund it to ensure financial viability for the
entities. "You can't give a mandate and not fund it," Rajan said. "After all
public sector banks also have private shareholdings and are not any longer
an extension of the government. They should be seen as independent
entities."

Rajan has a clear message to Modi and his Finance Minister, Arun Jaitley:
Stop treating state-run banks as extended arms of the government but as
independent institutions, which are answerable to shareholders. The
government will do well by listening to Rajan's advice.
Posted by Indian Bank Kumar at 10:49 PM

sir,
Please for knowledge sake Ludhiana is Major a class city.
thanks

Rajan is right. But the Political Bosses bother for their vote banks. They do not bother about any PSBs losses due. to their wrong policies. Even the media does not take up these issues for hot discussions, seems to be an arm of Govt/Political leaders. May God save our country.