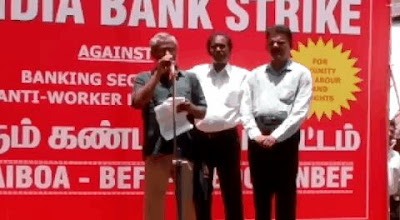 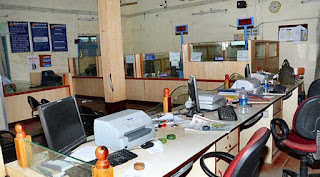 PRESS RELEASE:
CENTRAL TRADE UNIONS CONGRATULATE THE WORKERS FOR UNPRECEDENTED STRIKE ON 2ND SEPTEMBER
It has been an unprecedented strike of millions of workers at the call of Central Trade Unions. Response has been as never before. It is the biggest strike ever in the country.
This strike has been called by 10 Central Trade Unions. It has been supported by thousands of local unions, unaffiliated associations and federations. It is the largest unity of the trade unions that has done miracle. All sectors of the economy are affected.
The strike received the all-out support of the people. The strike call was given against Govt.negative response to 12 point charter, the main among these being the aggressive steps
being taken by the Govt. to amend labour laws in favour of corporates.
We congratulate and salute the gallant workers for their magnificent response. We expect Govt. to take lesson and take steps to ameliorate the grievances of the working
masses. It must restart discussions with Central Trade Unions for concrete solution to the demands failing which the struggle will be intensified.
This strike has been so spread because of the growing discontentment among working people against anti-worker policies of the government. It is also a protest against food
price rise and failure of the government to contain the slow-down of the economy leading to heavy retrenchment and informalisation.
The strike has been unprecedented in transport, Oil, Coal, Power, Bank, State Govt. employees, Insurance, Port & Dock, Defence, Postal, Telecom and automobile industries.
Thousands of workers have been on street to make the strike as an excellent success.
Delhi has also the impact of the strike.
The Central Trade Unions condemn the police action and atrocities by hooligans on the peaceful agitation by the trade union cadres for this strike in West Bengal. It is a state
backed terrorism. We believe all the right thinking people of the country unitedly protest against the atrocities committed on the trade union cadres of West Bengal.
Despite the terrorism sponsored by the state, the undaunted trade union activists have made the strike a success. We greet them.
There has also been lathi charge in different parts of the country. There have also been cases of intimidation by the police and arrest of workers. In some states, despite imposing ESMA, workers have moved forward undaunted to make this strike a grand
success.
The Central Trade Unions condemn the reckless police action.
Statewise and sectorwise details are given as hereunder:
SECTORAL
Road Transport
In almost all the states workers of State Road Undertakings went on strike. Even Private
road transport like autos and taxis are off the road. Roadways buses in Haryana, Delhi,
Uttarkahand, Himachal, UP and other states are also off the road. Magnificent strike of
transport workers affected the normal life of the people for which CTUs are sorry.
Defence
Defence production has come to a standstill. Nearly half a million ordnance factory and
installation workers throughout the country observed today’s strike.
Banks & Insurance
Strike is 100% in financial sector. More than two millions workers both in public sector
and private sector financial institutions went on strike.
Coal
Complete strike in coal mines. Even BMS workers joined the strike.
Non-Coal
Mines like in Iron Ore, bauxite, copper, aluminum and others was complete. The
response was tremendous.
Steel Sector
The strike has been complete in most of the places in steel sector including first time
strike in Bhilai plant.
Postal
The strike has been complete in postal department. Most of the States with
workers/employees holding protest dharna/meetings outside the offices.
Oil Sector
The strike in oil sector was complete in almost all parts of the country. Supply of Aviation
fuel to Airlines was affected leading to cancellation of some flights. LPG plants were
completed closed in all parts of the country affecting gas supply.
Telecom
Nearly complete strike in BSNL throughout the country. Even BMS workers joined strike
in BSNL.
Electricity / Power Sector
The Strike was almost complete in most of the states in power sector.
Tea Gardens in Eastern India and south India were totally on strike.
POSITION IN STATES
The strike was total in the states of Kerala, Assam, Goa, Telangana, Pondicherry,
Rajasthan, Himachal Pradesh, Odisha, Manipur, Uttrakhand, Bihar, Chhatisgarh, and
Jharkahand, as also most all the sectors of Gov. and Public sector as well as Industrial
areas were on strike. Several of these states even traders closed down their business and
shops and so it became band like situation.
The strike was massive in the states of Punjab, Haryana, West Bengal, Madhya Pradesh,
Uttar Pradesh, Andhra Pradesh, Tamilnadu, Delhi & Meghalaya where some of the
sectors were on hundred percent strike.
It was heartening to note that some of the establishments and industries have gone on
strike after almost decades like in Bhillai, Iron Ore Mines, BHEL and some steel plants.
Most of the Auto and Taxis went off the road in Delhi & NCR as well as in several towns
and cities in India.
Rail Roko also took place in several areas in various states.
INTUC AITUC HMS CITU AIUTUC
TUCC SEWA AICCTU UTUC LPF
Posted by Indian Bank Kumar at 12:06 AM

Union leader searching their ground. Each and every strike they called historical, but in reality they are loosing faiths of employee and reason for suffering of common people due to strike

It is strike of central trade union,then please verify the roll of CPI(M) in west bengal