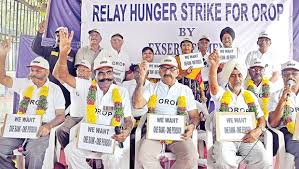 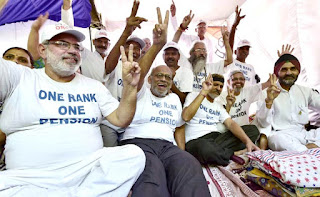 What is OROP? (One Rank One Pension for Ex-Servicemen)

One Rank One Pension’ basically means that retired soldiers of the same rank, who have retired after serving for the same length of service, will receive the same pension, irrespective of the date/year of their retirement.

A Pay Commission sits every 10 years and gives recommendations for enhancing the pay and allowances of the serving personnel based on the various factors like inflation, price hikes, and increase in living expenditures to meet the explicit needs of the lifestyle befitting the stature of a defence officer, etc.

Pension of the officers superannuating is based on the last salary drawn by them at the time of retirement.

Hence, with each consecutive Pay Commission, the military veterans who retired earlier received lesser pension as compared to those who retired later with the same rank and length of service.

Currently, all pre-2006 (the year the 6th pay panel report became effective) pensioners receive lesser pension than not only their counterparts but also their juniors.

Implications of Implementation of OROP

The One Rank One Pension scheme has been a long-standing demand of the over 25 lac ex-servicemen of India and it's implementation would result in bringing about parity in the pension of earlier retirees, who perhaps need it more than their younger counterparts.

The implementation of the scheme is expected to benefit 600,000 widows and a large number of decorated soldiers, who truly deserve to be treated with utmost dignity.

The scheme is estimated to cost around Rs 8,600 crore initially and subsequently several crore rupees annually.

Promises by Successive Governments for Implementation of OROP

The demand for OROP by the ex servicemen has been there every since the era of Mrs Indira Ghandhi, who had promised its implementation.

The major country wide strive against the issue began on 08 February 2009, when more than 300 retired soldiers of varying ranks had marched to the Rashtrapati Bhavan in New Delhi and had returned medals won in combat and for distinguished service as they sought equal pension for each rank.

In order to appease the ex servicemen, the UPA government in 2009 declared that it had earmarked Rs 2,200 crore annually to improve the pension of ‘Person’s Below Officer Rank (PBOR)’ as a step towards partial implementation of the OROP. A total of 1.2 million pensioners did benefit from this initiative.

In a brazen show of bureaucratic red tapism, in 2011, the Department of Ex-Servicemen Welfare of the MoD pointed out to a parliamentary committee, that OROP was not feasible to implement since documents of military personnel were said to be destroyed after 25 years.

The same is not true at all, as the pension documents of the veterans are not only preserved during their lifetime but also after their demise to accord family pension.

After series of protests by the Ex Servicemen Association, the UPA government towards its fag end agreed in principle to clear the scheme in 2013.

The NDA also renewed the hope for implementation of OROP by unequivocally including it in its election manifesto.

Crying baby only will get milk. It's time to act fast.

soldiers' long drawn fight is over. We have to learn many lessons to achieve our goal. Spending time in discussion forums will not yield any result.Updation of pension will solve all issues of pensioners. The achivement of ex army men gives us a ray of hope. Let our unions take the clue from the news.

We the bank retiree are interested in talking without action including me. So many cases are with supreme court . these cases be followed. Many judgements are there reg 200%DA pension updation family pension. Why case not be filed/followed through senior advocate side by side approchimg FM/PM/others? If UFBU is not coming to help us then why waste time in approaching them again and again. If retirees donot want any action then sit and reqesy GOD to do justice and punish the hurdlers here or there

Congratulations at last for achieving OROP for respected ex-service men army . On the other hand UFBU in banks played a shameful role to reduce the pension of retirees instead of increasing it during this 10th bps that is Nov 2012 to Oct 2017 SHAMELESS LEADERS