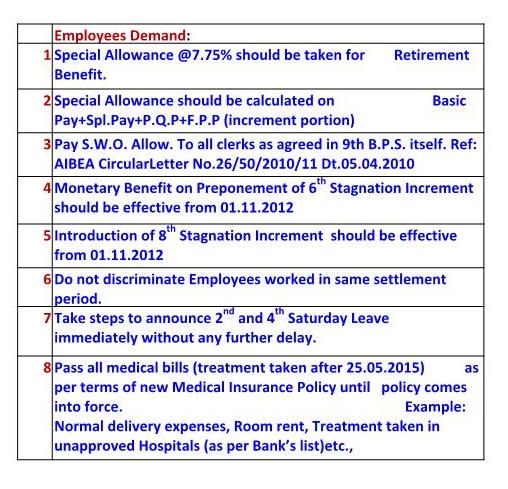 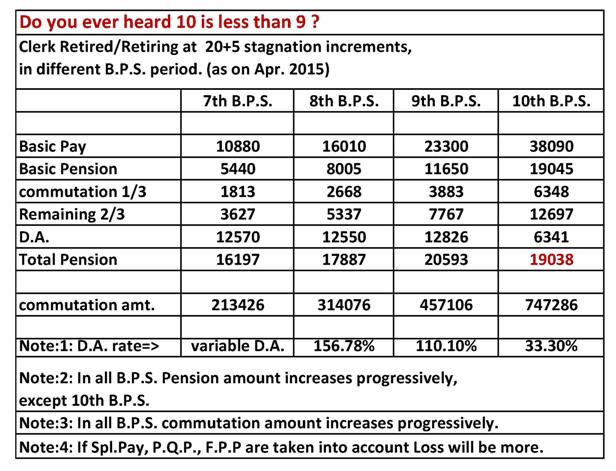 On 25.05.2015 Full settlement signed!
Still UFBU or Individual Union has not opened their mouth and give explanation,
Why Loading on Basic Pay is restricted to 2%?
What made them to accept this proposal?


It may be recalled during 7th B.P.S., IBA has decided to delay/postpone payment of arrears
to three Banks viz. Indian Bank, UCO Bank, United Bank.
Only BEFI has objected it, and refuse to sign the settlement.
BEFI has signed the settlement only after IBA agreed to pay arrears to these Banks along with
other Banks.
What happened to BEFI now?
No circular justifying the decision of loading on Basic Pay is issued till date.

After signing of settlement, IBA has announced some clarification contrary to the provisions
already agreed on the plea of “omitted”.

2nd and 4th Saturday Leave has not been implemented till date.

Some Banks asked for undertaking from retired employees to give option on Increased
Commutation arrears. On seeing the arrears chart for pensioners, they are shocked.
Though some of the pensioners know this from social media, others who are not in social media are disappointed on knowing that pension is being reduced and a portion of pension paid is to be recovered. .

From the comments, feedback from employees from my Face book page and Blog,
I place the following demands on behalf of employees and request UFBU to demand for reopening the 10th B.P.S. and make the following changes to avoid anomaly.
Posted by Indian Bank Kumar at 3:21 PM

Dear Com.Kumar, You have relentlessly crying for justice but all concerned are turning the deaf ear. If we teach a fitting lesson to just one man Mr.CHV everything will settle in the right place. When we are going to do it. With so much of spit on his face, shamelessly issuing circulars and boasting as if he has achieved something. As he is unable to read the 'defeated face' of lakhs and lakhs of employees, he is worse than a lunatic. We will pray to God to reopen the X BPS

Sir,
Demands are very reasonable and needed to rectify the anomalies of reducing pension etc,and it is possible if UFBU at least now realizes that they have taken wrong decision because of which entire banking community is abusing them.

what about 2 and 4 saturday holiday.. already all saturdays working upto 5pm and more even half day.please treat us like human beings...

Whether CHV and other comerades from Employees side and AIBOC officials lead by Mr. Singh would agree for re opening? They got their share from bank management in suit cases sacrifing the "Aam Bankers" at the altar of IBA and Bank Management. What is the view of great CBOA leader? I have no faith. Come 7th pay commission which promises minimum 15% increase. It is better to be a Chaprasi with Government than a bank officers / Managers and others. Don't dream my dear bankers. Long Live Bi-partitism.

No one will open their mouth.

Higher grades will get 11% SPL pay....
Most of the benefits goes to them only. They are the people who negotiate, and negotiated best for themselves only, unions are only instrumental in this bipertiate. Iba chairman got awarded for the his best efforts and elevated to CVC...

What else the best reasoning to get the understanding that we are sold.....

i am not a member of aibea or aiboc. everybody blames them.in my case regarding anomaly in stagnation increment only aibea replied within hours.our union and others are silent.befi issued circular denouncing iba s stagnation increment circular,but what next is not known.befi only makes sound one aibea member told me if aibea is responsible then why others were silent,in the name of solidarity befi explains silence.this is clear hypocrisy,in my opinion all others like ncbe befi are equally responsible in sacrificing employees interest.befi is vociferous in demanding levy @4% from members for what% so each and every one should know who is culprit.as long as these hypocrites and blood sucking union are there at helm of affair.nothing is possible leave aside reopening of a bipartite.

Do u think that these so called highly experienced leaders (if they deserve to b called) did not forsee the implications of the settlement. When they have got their dues why the hell they will be bothered abt. aam bankers nothing is going to improve just try to live with iy

Our leaders have to be transparent & fights for pensioners.

Shortlive unions/associations and leaders for what they have done for their members.At least now realise _ reopen_ and rectify the mistakes.CHV n sardar (is he?) Should be kicked out. They are the main culprits. And even others who were part of negotiation are also culprits and they should be kicked out.

Did not the well experienced senior leaders know the implication of meagre 2% load when it was placed for signing most cunningly by IBA with tacit support of some majority unions in the first MOU ????
There is no history in bipartite for signing such MOU with clear mention of loading in BP.It is a matter of negotiation only.If your maid servant demands a rise it will be not 2%.In the history of trade union bargaining you dont find any settelement with 2% load in BP.Do the leaders ever realise what will be their demand in BP in the next Bipertite.What is the legal standing of special allw to all at uniform rate? Can it stand the judicial scrutiny?

Why dont all go for enmass resignations from the associations. These associations So called leaders threaten poor bankers to work as per their wishes and give levy as hogh as 4%. Shocking to know why these need 4% levy if it is not required for personal use. With 15% increase the total burden of approx Rs 4800 crore annually. That means around Rs 1280 crore annually for 3 years these unions will get for doing nothing and Rather acting as betrayers. Shamless fellows these are.

Those who gave everything to bank by working around 35 to 40 have been left unattended by the leaders. Still question in mind why only 2% increase in Basic? I think leaders have taken well calculated levy from officers who retired/ retiring during span of 10th BPS.Why so much calculation were made in settling the BPS, when 15% increase was settled then the simplest of the simple way was to increase all components after merging DA by 15%.But UFBU leaders are intelligent & made the things difficult for their members.Now they are not in a position to satisfy members & hiding.Rightly said by you 10 th BPS should be reopened & anomalies particularly of retired/retiring staff should settled and these should not be left at the mercy of IBA.For se socho or kuch to karo.Thanks for reading these issues.

The way these leaders are playing with the interest of the bankers, we will see that if they take part in coming two or three Bipartite settelmentsTHEY PENSION WILL BECOMENEGLIGIBLE OR ZERO.They are HEADLESS AND HEART LESS LEADERS, AND THERE MAIN CONCERN IS THIER COMFORT AND THEIR EGO.Leadership is thier bread and butter that is why they will never leave it.

SUNDAY BANKING IN FEW BRANCHES OF PSBs MUST ALSO BE ABOLISHED. UNIVERSAL HOLIDAY, THE SUNDAY must never be touched by any PSB. aituc, citu, intuc, bms ETC., ETC., who shout somany mighty slogans must support the cause of Bank Officers and Employees. why they not questioned the UFBU, AIBOC, AIBOA when there is much resentment from members for that mere2 % of just 15% ?
why the Prime Minister who is well aware of these facts has so not been questioned by aiboc or aiboa ? Should the Officers in PSBs get the same 2% of 15% what the award staff got ? Should they not get better percentage of their New Scales and Allowances ? open debate will not yield desired result. the aiboc, aiboa, the prime minister of india must be regularly and repeatedly questioned for betterment of Officers Pay Scales and Allowances as their role paly and responsibilities are much more and significant in nature. 100% DA neutralisation as on 01-11-2012 SHOULD TAKES PLACE .