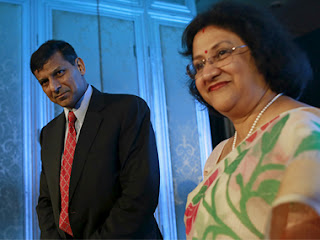 SBI chief is more right than Raghuram Rajan on the threat from payment banks
Reuters
According to BusinessLine,
Rajan, who gave licences to 11 payment banks on 19 August, had this to day:
“I don’t think these 11 new banks are a threat to the existing banks.
These new banks will complement the existing system by traversing the last mile.
The reason for this is that there is nothing the universal banks cannot do that the payments banks can do.
But there are some…..things that the payments banks can’t do which the universal banks can.”
To which Bhattacharya offered a counter.:
Since payment banks are allowed to raise savings deposits, “if they go for poaching rates, then many of the commercial banks could lose a portion of the deposits which are relatively lower priced.” This may affect their “ability to transmit rates and give further loans at lower rates.”
Actually, both Rajan and Arundhati are right – and wrong.
The SBI chief is more right than Rajan.
First,
the new payment banks are already big players, and they are not entering the game only to serve the last mile beyond where banks can’t reach. Players like Airtel, the Birlas, Reliance, and PayTM (a wallet company) are not in the game only to serve inaccessible rural customers through mobile banking. They will go for a large share of the low-cost deposits in urban areas in order to make their operations in rural areas viable. So the competitive threat is real, and payment banks and universal banks will be real competitors in serving the urban customer.
Second,
while Rajan is right to point out that there is nothing payment banks can do that universal banks can’t, this statement is misleading. The fact is the cost structures of universal banks will be higher than that of payment banks. The latter will opt for a minimum number of branches, and maximise customer-reach through technology, especially mobile technology. The cost structure is more skewed in the case of public sector banks, which have a huge kitty of bad loans and wide branch networks and excessive manpower. Payment banks are thus a direct threat to nationalised banks which are both short of capital and excessively burdened with costs. So Bhattacharya knows what is at stake.


Third,
payment banks have one disadvantage, and one big advantage. Since they cannot lend to customers and have to invest all their deposits in government bills with less than one year’s maturity, they will be able to offer higher rates on savings deposits, but not on longer-term fixed deposits. But this also means they do not have to block a large amount of funds in statutory liquidity ratio or lend to the priority sector. In a line, this means they are completely de-risked from bad loans, and can thus focus on delivering high quality customer service. While no one is going to keep all his money in a payment bank (there is anyway a Rs 1 lakh limit on deposits), most people will move some of their cash payment requirements to such banks, especially in urban areas where electricity, telephones, and cabs can be paid for without cash using the mobile payment networks of payment banks, especially those run by the big telcos. This means some of the banks will suffer an outflow of low-cost savings and idle deposits to payment banks.
Fourth,
Rajan was being a bit disingenuous when he said a mere 11 payment banks will not affect regular banks. If the intention is to offer payment bank licences on tap, surely we will have more than 11 payment banks before the year is out – or early next year?
Maybe Rajan was trying to underplay the threat posed by payment banks to public sector banks in order to prevent them from lobbying with the government to curtail competition, but he is surely wrong is saying that they have nothing to fear.
What he should have said was competition is going to intensify, and so all banks must be ready for that.
******************************************************************
What Unions say?
Grant of License to Payment Banks in private sector is clearly anti-public sector.
Yesterday RBI has announced the grant of license to 10 private sector companies like Reliance, Aditya Birla, Airtel, Vodofone, Cholamandalam, Fino Paytech, Tech Mahindra etc. to start ‘Payment Bank’ in addition to allowing Dept. of Posts to start such a Bank.

Our economy was saved from global financial and banking crisis only due to the reason that our Banks were insulated by Government controlled public sector banks. Our strong banking regulations helped in sparing the country from a major financial disaster.

But in the name of banking reforms the Government is trying to dilute PSBs and boost private Banks. Because of the colossal private corporate delinquency, public sector banks are saddled with huge bad loans. All these are private corporate companies who had defaulted and it is strange that RBI and Government want to encourage the very same private sector to start Banks !

Further because of the thinning of margin and profits, Banks are striving hard to fetch low cost deposits like savings and current account and every Bank is concentrating on CASA deposits as the main route to improve their cost of funds and profitability. CASA Deposits/Savings deposits of the common people are like oxygen to the Banks.

At this juncture, giving license to such private companies to start Payment Banks whose main job is to collect savings and current account deposits will cut at the roots of the public sector banks.. We know the history of such small private banks in the past who have cheated public savings and vanished from the scene.
In India savings of the people is an import of the social capital and one cannot afford to play with this. Public savings should be fully regulated and controlled by the Government in the interest of our country and the common masses. If these private Payment Banks are allowed to gather the savings and current deposits of the people which are of low cost, public sector banks will be deprived the same and hence the cost of banking services in PSBs will increase and rate of interest on small loans and priority sector loans will also go up.
Hence allowing such Banks in private sector is anti-public sector banks and in the long run anti-people.

All are appointed to work as agents to the corporates ... Saying all these are good to general public....