Bank Employees Federation of India (BEFI) general secretary Pradip Biswas on Tuesday urged the Union government to enact stringent laws to deal with corporate houses wilfully defaulting on huge loans from public sector banks.
Talking to The Hindu on the sidelines of a State-level workshop of BEFI activists here, Mr. Biswas alleged that a nexus of politicians and corporate houses was active across the country to swindle money from the State exchequer by borrowing huge loans from nationalized banks and refusing to repay them.

He said the organisation has recently released a list of over 1,100 companies that have defaulted on huge loans availed from nationalised banks across the country.
“Their reluctance to repay loans causes accumulation of non-performing assets of nationalised banks at an alarming rate. This has started to affect the performance of banks and many of them are on the verge of collapse. Advocates of privatization have also started exploiting the situation,” he said.
He urged all central trade unions and political parties to make positive intervention on behalf of nationalized banks to protect them as harbingers of equalized growth. The growth in NPA is also desisting the banks from performing their social and cultural obligations to the society in general, he said.
“The gross NPA for 26 public sector banks for 2013-2014 stands at a whopping Rs. 227,264 crore while the net NPA for the year is Rs.130,360 crore. Because of this alarming rise in the NPAs, the banks had to set aside Rs. 90,626 crore as provisions and contingencies, bringing down the profit to just Rs. 37,007 crore,” he pointed out.
The list of defaulters includes some of the top corporate houses in the country which vouch for globalization and privatization, he said.
He said there was a nexus between corporate defaulters and politicians.
“If there is no nexus, how can an airline operator who defaulted thousands of crores in banks loans bid for millions of dollars in the IPL (Indian Premier League),”he asked.
“There is an immediate need for enactment of stringent laws, including criminal provisions, and allowing banks an efficient mechanism to not only recover their loans but also deter further defaults,” he said.
The BEFI leader also condemned recommendations of P.J. Nayak Committee which calls for lowering government holding in banks below 50 percent. “We have already submitted a memorandum to the Union Finance Minister expressing our concern over the Nayak committee report. We will take to the streets if the recommendations are implemented because if it happens then there will be a procession of suicides,” he said.
************************************************************
AIBEA demands detailed probe of top 400 bank loan defaults

In view of the rising bad loans in state-owned banks, the AIBEA said the RBI should periodically publish the list, the union government should amend recovery laws and take criminal action against wilful defaulters

The All India Bank Employees' Association (AIBEA), while revealing wilful defaults worth Rs70,300 crore in 400 loan accounts in public sector banks (PSBs), has demanded a detailed probe in to the loan sanctioning and loans turning into bad assets.

“Why these loans are not coming back? Who is responsible and accountable? If the bank executives have given the name, let there be a probe. If there is a political nexus, let it come out. Country should not be for somebody’s default. People should not be punished for corporate default,” said CH Venkatachalam, general secretary of AIBEA in a statement.

AIBEA also launched a nation-wide campaign that stresses on three key point, like the Reserve Bank of India (RBI) should periodically publish the list, the union government should amend recovery laws and take criminal action against wilful defaulters.

Earlier in December, the bank union had pointed out that the top four bad loan accountsadd up to a massive Rs22,666 crore, which include Kingfisher Airlines and Winsome Diamond and Jewellery Co. The Vijay Mallya-owned and now defunct carrier is the biggest defaulter and owes Rs2,673 crore to PSBs. Mumbai-based Winsome Diamond and Jewellery Company (erstwhile Su-Raj Diamond India Ltd), with dues of Rs2,660 crore, is the second highest defaulter, followed by Electrotherm India Ltd at Rs2,211 crore, the union said. 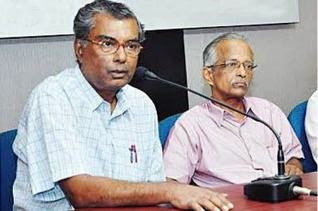 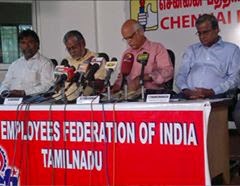 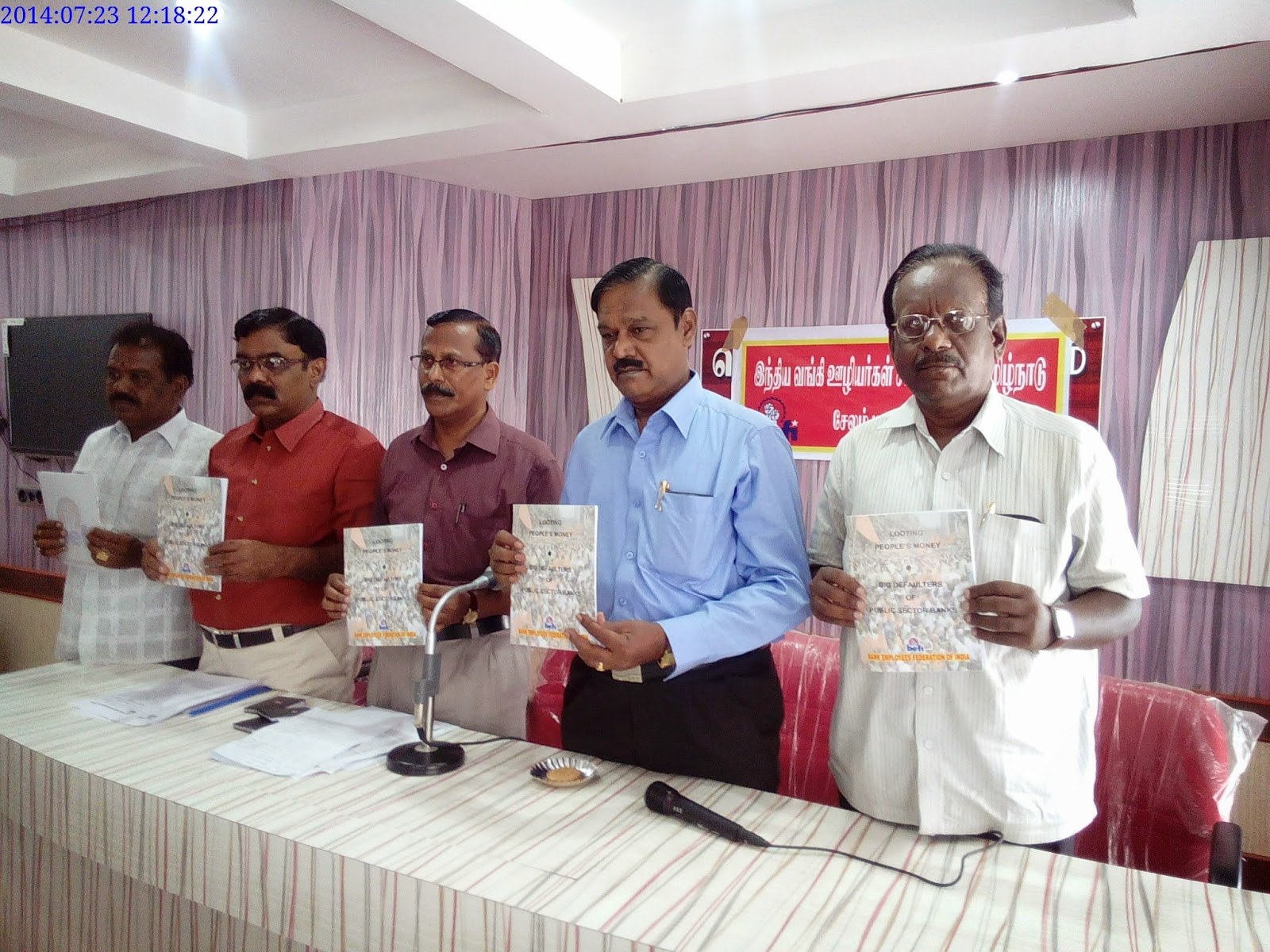 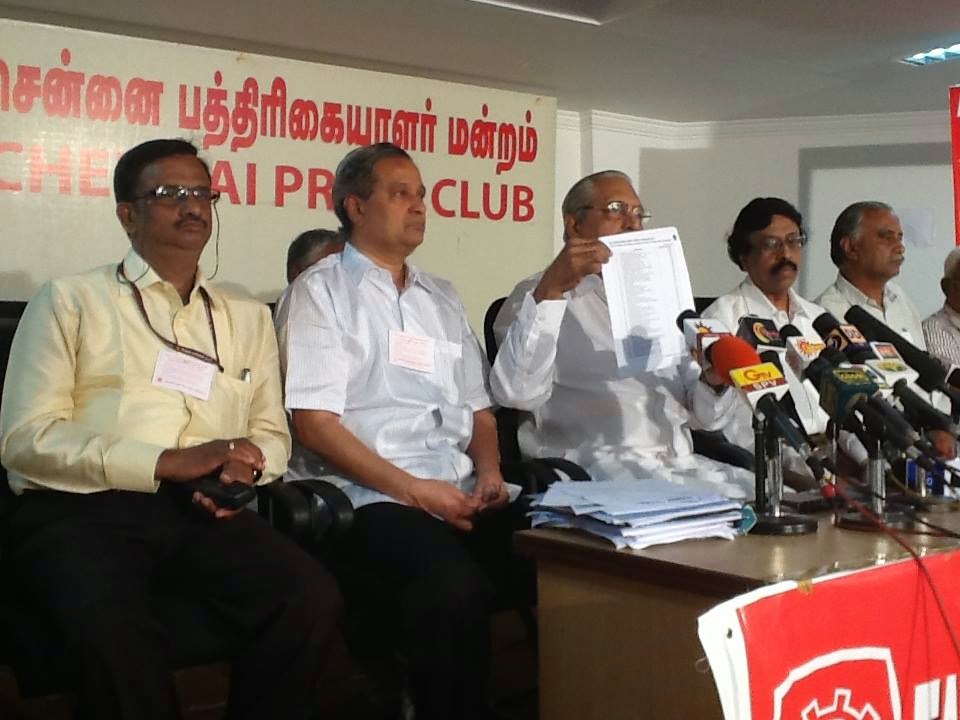 What is the meaning in publishing the names of defaulters without a toothless law in India ?. Moreover the most of the defaulters are either backed by strong politicians and political leaders or they themselves being political leaders. The public should realise that their money only being plundered by these defaulters. These union leaders should not stop by releasing the list, they should take continued efforts to make the public to realize that it their money being misutilised and plundered thro' the PRINT & VISUAL MEDIA at regular intervals (just like the MODI HYPE - Which made him our PM) or a movement to be started to make suitable amendments in law to deal such defaulters immediately to save our country's financial standings atleast for the future generations.

Sir, for quite long, we have seen many lists being circulated in various fora, and all of them, without any exception, evoking breathtakingly uniform response - indifference on the part of those answerable. Releasing a new list does not serve any purpose, unless you want to back it up with sincere efforts to pursue that with forceful and decisive action. The issues that confronts the fraternity of bank employees is the impact of the alarming growth of bad loans, the resultant increase in the provisioning requirements, and the impact thereof on the prospects of an honourable wage-settlement. We have witnessed shamelessly specious arguments being bandied about by many, including the former FM himself, to the import that the entire profit of PSBs is not available for wage increase, but a substantial portion thereof is necessary to meet provisioning and for meeting the cost of social banking initiatives. Outrageous as that remark was, it invited only tepid response from unions, which is highly deplorable. Bad loans is the result of brazen interference by the government of the day in the day-to-day functioning of banks, and, in particular, their credit administration, resulting in large scale deviations from laid down policy guidelines in order to favour some chosen persons or entities while sanctioning loans. An overwhelming majority of defaulters in any list will be ultimately the beneficiaries of these large scale 'deviations'. For the felonies committed by the politicians and the top executives of banks in cahoots with them, depriving the whole community of bank employees, none of whom had any role to play in the nefarious game, is not only devoid of any sense and logic, but is also a monstrous inequity. The reason why all these so called leaders of unions, including the BEFI here, are not very vocal about this matter and always make half-hearted protests about the ongoing scam of accumulation of bad loans in PSBs has so far been eluding our comprehension. Why are these people not able to expose the sheer untenability of these arguments advances by the opponents of a decent wage increase, is thus far unclear.

Axis Bank has launched an instant personal loan service called “24X 7 Instant Personal Loan” — available through its mobile app, via which its select customers can avail personal loans that will be credited to their accounts instantly. To apply , visit personal loan in Chennai

Thank you for sharing such great information.
It is informative, can you help me in finding out more detail on