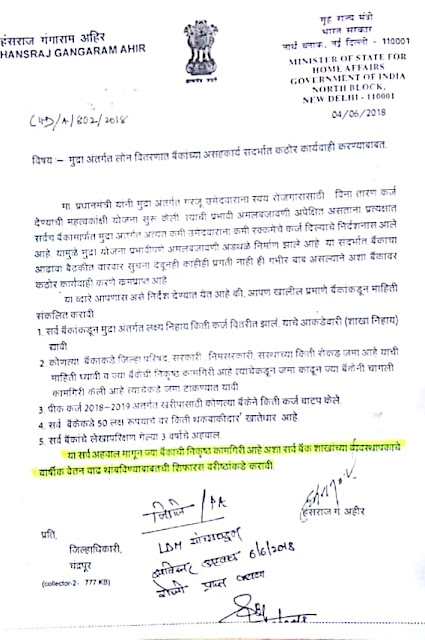 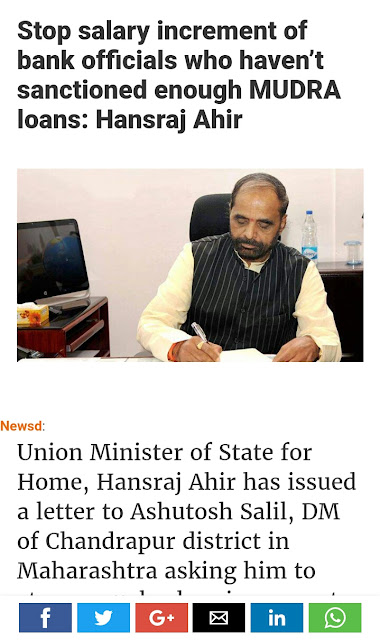 Union Minister of State for Home, Hansraj Ahir has issued a letter to Ashutosh Salil, DM of Chandrapur district in Maharashtra asking him to stop annual salary increment of those branch managers who have not completed their target to sanction the MUDRA loans.


The letter issued on June 6 by MoS for Home Hansraj Ahir orders Ashutosh Salil, to provide data from all banks (branch-wise) regarding the amount of MUDRA loan disbursal against the set target.
Chandrapur DM has also been ordered to collect information about the deposits of Zila Parishad, govt & quasi-govt organisations in banks. Take out deposits from branches that are not performing well and shift the deposits to performing branches.
In a letter, it is also ordered to get the details of 3 years audit reports of all banks, details from banks who have given loans for Kharif crop during 2018-19 and revelation of names of the loan defaulters who have taken more than 50 lacs from the banks.
On May 29, 2018, Prime Minister Narendra Modi said that loans worth Rs. 6 lakh crore were given to 12 crore beneficiaries under the MUDRA scheme and accused the previous governments of tokenism and not doing enough for small businesses.
As per media reports, the government fear that the non-payment of MUDRA loans may further raise the already stashed non-performing assets (NPAs) and may imperil the recovery of banks from the NPA stagnation.

The Pradhan Mantri MUDRA Yojana (PMMY) was launched by the Prime Minister on April 8, 2015, for providing loans of up to Rs. 10 lakh to the non-corporate, non-farm small/micro enterprises. These loans are classified as MUDRA loans under PMMY. These loans are given by Commercial Banks, RRBs, Small Finance Banks, Cooperative Banks, MFIs and NBFCs.

This is what happens when a dudh wala becomes minister