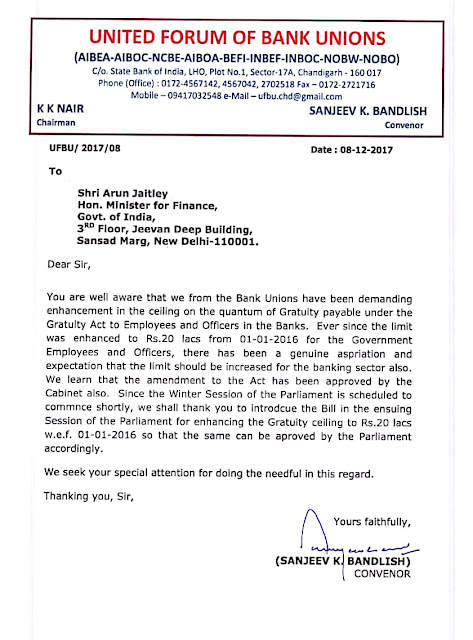 Posted by Indian Bank Kumar at 9:28 AM

Hoping to have a good new year 2018. Enhancement in gratuity ceiling to RS.20/- Lakhs, a meaningful satisfying bi-partite settlement clubbed with 5 day banking and of course revised pension for retirees. Let the dream come true.

Everyone hoping but practical nothing have achieved only always assurance from unions and now December also going and no one interested in wage negotiation. IBA & UNIONS are playing delayed tactics to make the fool of the employees.

We have hope in our Union leaders,without our seniors in banking surely we juniors can'nt lead a good customer service,and make bank profit,even Npa is surviving.so we depend on our seniors,make New year a good salary increase for all staffs.thanking you Union leaders .India zindabad,bank Union zindabad,sbsu sindabad.

Please be positive and have faith in union. We can achieve our goal with positive results. As the union is having quite enough experience for pay settalment. Wish you Happy New Year and good future in banking sector. Union jindabad.

Shame on you.
Clearly you don't deserve any pay hike,to say the least

Nothing being done by our union rather calling all wrong and delayed action of this useless govt. Why we do appreciate for such govt action which already be done in due course . We should concentrate on our pay revision demands only if really we want to corner this govt

You have blind faith or you want to apply your mind that what is going on in realty in the past and now. What is the offer made by IBA during the last 6 months. Who is responsible for that employees or the union.

It is presumed that UFBU is waiting for Gujarat election to conclude and to seek Government intervention in the on-going bi-partite negotiation. Cleverly in the mean time AIBEA/AIBOA have called for all India strike on 27/12/2017 to support IDBI genuine cause. It will be fruitful if UFBU join strike action and show our our banking fraternity total unity so that government will come forward for amicable settlement by giving substantial load for effective wage revision. Comrades try to understand this meaningful clever ploy of representatives and avoid unwarranted unethical comments which shall boomerang the whole process of settlement. INQULAB -ZINDABAD

Government and IBA are both in handy and try to delay as much possible as they can. Any delay will only increase the cash government will be able to use for it's future political game.

Govt and IBA will not try to settle this atleast till next general election which is scheduled in 2019.

As long as illiterates like yourselves exist in this Universe no logical conclusion can be arrived. Persons like your mind always tries to find fault on others and at the end you will be the first to calculate arrears and revised salary when bi-partite is settled. If you a sincere comrade not believing in negotiation and bank Union representatives at least have the guts not to accept revised pay and continue to draw old salary. Can you ever dream of this solution.

Count us the contributions of union leaders towards banking industries profit or growth. It's a BIG ZERO. They get their salary out of our efforts. So stop pampering them.

Thanks for your kind words. You are a small kid who don't understand anything.

I am not here to find anyone's fault including yours and yours so called unions. It's the job of the Union to discuss and settle the employee charter of demands on time. Govt has initiated to start settlement talks from Jan 2016 itself. Your so called unions we're sleeping till govt sent 3 remainders and woke up only on May 2017 with first discussion.

Till today you and your Union has not giving clear details of which are the demands accepted by IBA and which are in progress and which are rejected.

Simply having some breakfast and general topics and delay the settlement talks as much as possible.

So once again don't try to preach others. If you are not able to perform the job for which you are hired then it's better you resign and go home. Tell these kind words to your Union.

Another point why I have to reject revised pay. I don't understand your so called knowledge on this.

Last but not the least I am not a Bank employee. A normal citizen who just
cares for bank employees.

Outsider has no say on our wage revision, demand and settlement. Kindly confine to your subject and as common citizen fight against government policies such as compulsory aadhar linking, demonetization, removal of subsidies, depositors insurance policy, wilful defaulters. Please group all like minded normal citizen and come to road, stage dharna, demonstrate against anti-public policies of state/central governments. Leave it to bankers to solve their issues and stop unnecessary poking into other house developments.

UFBU is useless.In union govt 2.7 times of pay has been fixed in 7th pay commission without any strike or loss of pay but in banks no hike for pensioners, in 10th BPS 7.75 per cent
Of spl allow paid but it does not attract pension
How UFBU fooled bank employees

Pay commission for Government employees comes once in 10 years but for Bank workers it is once in 5 years, which makes huge difference.