Recently, there was news that Oriental Bank of Commerce, Allahabad Bank, Corporation Bank and Indian Bank merging with PNB, will form a better balance sheet. "We have not heard that at all. May be a WhatsApp message is getting circulated. At present, there is nothing as far as our knowledge goes,” Indian Bank Executive Director A S Rajeev told Deccan Herald.
Rajeev said, "Our capital adequacy ratio (CAR) is the best in the industry for the past four years, which is 13.20% and tier I capital is 12.08%. We are a very well-capitalised bank. We don’t require any capital at all. We have enough headroom available for growth.” CAR, also known as Capital to Risk (Weighted) Assets Ratio (CRAR), is the ratio of a bank’s capital to its risk.
At present, the government holds 82% stake in Indian Bank. Rajeev was in the city to inaugurate specialised branches for retail and MSMEs. IND Retail will exclusively handle home loans, vehicle loans and mortgage loans and IND MSME will cater to the needs of MSMEs.
"We are targeting a growth of 25-30% this financial year through MSME segment. As of now, we have 33 specialised branches dedicated to MSME and we are planning to add 80 branches by March-end.”
For next quarter, the bank is purely concentrating on retail and MSME sector as corporate sector is a stressed area.


Karnataka stands fourth
In Karnataka, Indian Bank has 106 branches with 113 ATMS and 950 employees. The total business of the bank in Karnataka is to the tune of Rs 14,000 crore out of which Bengaluru contributes Rs 11,000 crore.
Indian Bank General Manager and Zonal Manager Bengaluru Zone S Chezhian said, "We are targeting a growth of 20% this financial year compared with 11% growth in last fiscal.” For Indian Bank, Karnataka stands fourth after Tamil Nadu, Maharashtra and Delhi.
Going North
Indian Bank, which has a massive presence in the South, is planning to open new branches in North India. "Overall, we are planning to open 150 branches, mainly in North India. We have already identified 200 most happening cities. Out of those, we have shortlisted 120 cities, and are opening new branches and rest will be set in tier II and III towns,” Rajeev said.
According to Rajeev, happening cities are those where industrial activities are picking up. The bank is exploring new states like Punjab, Chattisgarh, Jharkhand among others.
Highest ATM hits
Indian Bank has over 3,000 ATMs across India and gets highest hits. Rajeev claimed that the bank’s ATMs get highest hits of 175 per ATM, which is number one in the industry. Hits means number of transactions per ATM, including Indian Bank and other bank customers.
"On a daily basis, we expect minimum 156 hits per ATM or else it is not a profitable venture. Last year, the number of hits were 164,” Rajeev said.
TCS technology
Not lagging behind, the public sector behemoth has TCS technology platform when wooing more tech savvy customers. For retail and MSME, lead generation is happening through mobile application only.
Rajeev claimed that in many states including Tamil Nadu, Telangana, Chattisgarh and Bihar, Indian Bank technology is used in the government payment system. For example, in Bihar civil supply corporation, the Indian Bank has tied up with ration shops.
In South, Indian Bank has been selected for epf (electronic provident fund) payments along with SBI. In Tamil Nadu, entire MNREGS (Mahatma Gandhi National Rural Employment Guarantee Act) transactions take place on Indian Bank technology platform.
Notion as pensioners bank
On the notion of public sector banks views as pensioners bank, Rajeev said, "Average age of our employees is 38 years. Usually, there is a feeling that PSBs is considered as a pensioners bank. More than 70% of our customers are below 40 years.”
=Deccan Hearald dt.25.06.2016 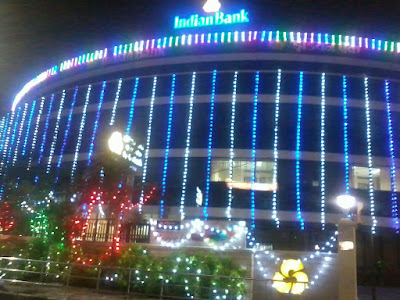 Great post....Thank you for posting the great content……I found it quiet interesting, hopefully you will keep posting such blogs…
If you Want more Click cash card