Loss by not taking Spl.Allowance of 7.75% for Retirement Benefit!! 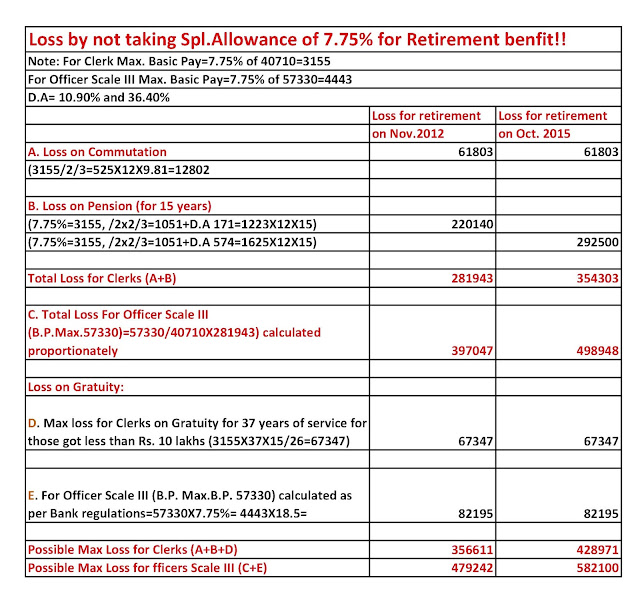 In the past 6 months I posted many tables, facts, figures etc., on 2% loading on Basic Pay, and taking out Special Allowance of 7.75% from Retirement Benefits.
You may recall that on 23rd Feb 2015 M.O.U was signed stating that loading on Basic Pay
will be limited to 2%.
Further you may remember that a week before signing M.O.U, General Secretaries of AIBEA and AIBOA (without accompanied by other UFBU constituents) met Finance Minister accompanied by D. Raja M.P.(mediator?).
After that meeting only everything decided and M.O.U is signed and announced publicly.
Till such time the loading matter is not leaked and kept secretly.

After that discussions carried out for where to load the increase if not in Basic Pay.
Again on 25.05.2015 it is announced that a new head “Special Allowance” will be introduced and this will not be taken for Retirement Benefits.
Generally when an employee retires, Bank/Unions will honour the employee with shawl, shake hand and a memento.
But UFBU/Govt/IBA hounour the retirees with a blow on their face, and stealing their hard earned rights and eligible money for retired life. They might have decided that these retirees will no longer be union members and more over they can’t do anything against them sitting outside Union/Bank.
Therefore, no need to pass on the benefits to them.
Yes, we know, that the aged parents are being admitted in “Old age Homes” only.
Everybody is concentrating on their life and interest only.
I have already posted different tables about the loss, a retired employee has to face out of this 10th B.P.S.
I decided to put an end to this subject by posting a table which shows how much amount a retiree lost in real terms out of this decision of denying Special Allowance for retirement Benefit.
Following are the benefits to be paid to retirees from 01.11.2012 to 31.05.2015
1. Arrears of annual Medical Aid.
2. Arrears of Salary for the period served.
3. Arrears for encashment P.L on retirement and on availing LFC.
4. Arrears on Gratuity.
5. Arrears on Incremental Commutation.
6. Revised fixation of monthly Pension.


How many Banks have disbursed all benefits to the retirees?
Posted by Indian Bank Kumar at 4:37 PM

In addition to all these Bank of Baroda is putting a cap on Gratuity amount to R's 10 lacs and no one is fighting even for the agreed benefits.

Whether checked in respect of recent retirees

Now it is useless to cry over loss in 10th BPS which is severely one of the worst settlement for the retirees between Nov2012to May 2015 It's time to get salary arrears &other benefits correctly, some mistakes exist in salary arrear sheets i.e PQP-1 is not revised &carry forward for calculation, revised monthly pension is not fixed properly, unjustified deduction of lavy which should be refunded to all retirees, Rectified mistakes for payment of salary arrears & revised monthly pension without any further delay

So long you can ousted the Befi, Aibea, Aiboc in the arena of Bipartite Settement, you will suffer till your last breath.

Not settled pending demands till date

It's a matter of shame for banker that we work huge but we not in position to bargain our pay structure. Today LIC settlement has been done and they get 13.5% hike of basic after merging DA 64%. They are for ahead to Bank due to right approach to enhance Basic instead of Special Allowance.

Dear Com Kumar, You are echoing the thoughts of lakhs and lakhs of employees and on the betrayal of Big Brother. Even if IBA / Govt. is ready, big brother will not open his mouth for the reasons best known to all. We have seen great Leaders and has the opportunity to see such traitor. He will be rewarded suitably. Still it is not too late. Other true leaders can take up the issue and render justice.

excellent analysis as always. aibea n aiboa along with an MP meeting FM Clinched the deal to their interest detrimental to the interests of hapless serving employees n retirees. your memory is long n sharp. keep it up. When the serving employees will rise to the occasion is nobodys guess. But as long as enlightened persons like you lead the light, there is always hope.

iBA & govt be fooling unions in place of grade pay treacherously renamed as special allowance as maximum retirements being due in this period ie.november 2017. General public expected justice from govt but when govt did not made justice then help from courts remain ultimate way. Hence now prayer to submit to the court for justice to include this special allowance treating it grade pay as originally came into existence for inclusion into pension benefit.

Will the UFBU learn lesson from LIC wage revision. It is strange how special allowance has been introduced not ranking for Pension. Just to befool the banking working class and resultant into lesser pensions for bankers. Profitability of banks largely suffer due. to the govt. policies. The onus is put on bank employees. Banks should be brought under Central Pay Commissions. It is high time we the bankers get rid of UFBU, unions and its leadership.

Bank pensioners will never pardon their leaders for depriving them increase in pensions.

In Lic the wage revision is not yet settled but only a proposal from management subject to approval from finance minister. The biggest hurdle is yet to be paased. Do not count chicken before hatching. Lic valonko nazar na lagao.

Our UFBU is a body of very sincere leaders, hence they will not do anything to annoy the IBA and Govt.

I also go by the views of anonymous writer that bank employees should mind their own business rather seeing other depatments like LIC of India. They may provoke their leaders to reopen settlement after settlement of something better in industry