No, PM Modi: Here's why I won't be giving up my LPG subsidy! 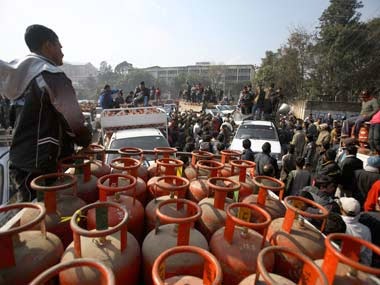 It is all gas.
A political party and its followers who threw a fit when the UPA government decreased the number of subsidized LPG cylinders now want everybody to renounce subsidy.
Vote them out for taking it away, was the outcry then.
Give it up, is the new status symbol and update now.
Good subsidy politics that helped candidate Narendra Modi has turned into
bad middle class ethics for PM Modi.Reuters image.
The crux of Modi’s appeal is that government ‘subsidy’ is only for
the poor and the ‘underprivileged’.
For those who can afford to pay the market price, it is, thus, unethical to claim it.
Clever ploy:
If you can’t convince them politically, blackmail them emotionally.
Put the burden of subsidy on their conscience while you munch your chickens

for Rs 29 in the Parliament’s canteen.
Let us get this off our chest straightaway.
The government is not doing anybody a favour or being financially generous.
It is just playing emotional politics to hide its predatory economics.

The Deccan Chronicle exposes the government’s double-speak on subsidy succinctly.
"Modi should realise that international crude oil prices peaked during the UPA regime and crossed the $115 per barrel-mark. The crude prices have today come down to just about $50. However, petrol and diesel are still sold for nearly Rs 70 and Rs 60 per litre respectively and subsidised LPG cylinder for Rs 450. The rates are almost the same as during the UPA regime, when crude prices were much higher. As per the open market policy being adopted by the Union governments since Mr Vajpayee’s tenure, the current price of petrol should be Rs 30 per litre, diesel should be Rs 21 per litre and LPG cylinder for Rs 250. But the NDA government has been openly looting the public by imposing various taxes and deliberately keeping the prices higher.
Under these circumstances, what right does Mr Modi have to ask people to give up subsidies voluntarily?


If he is really sincere and committed towards saving public money, he should allow the prices of LPG and fuel to be in accordance with the present crude prices."
So, the NDA government is picking our pocket, charging us more than UPA
(for unsubsidized cylinders) and then asking us to be generous enough to not reclaim what has been robbed.


Clearly there is no shame in seeking what is rightfully ours.
To insinuate that not giving up LPG ‘subsidy’ is tantamount to not contributing to nation-building, leeching off government dole is a white lie.


Most of the people who Modi expects to buy expensive cylinders are already paying huge chunks of their income to the government, for cross-subsidising many of its social schemes.
Most of us pay 10 to 33 per cent of our salary as income tax, whose slabs finance minister Arun Jaitley did not bother changing even after berating the UPA for being unkind to the middle class.

In addition, there are several other taxes—VAT, service tax, toll tax, house tax, municipality tax, garbage collection tax, cess for education, cess for Swacch Bharat, clean Ganga, fuel surcharge…the list is long. (A back-of-the-hand calculation would reveal that a person in the highest-tax bracket ends up paying nearly half of his income to the government.)
The government would have been justified in appealing to our generosity if this money, even a part of it, was being used wisely for the welfare of those who contribute it. But it isn’t.
The government has almost withdrawn from school education, leaving the field open for the private players who overcharge us (another form of tax due to government incompetence). The government’s healthcare system has collapsed, where, again, private players are thriving. There is no form of social security for the old, handicapped, ill and the unemployed. The government doesn’t spend enough on keeping roads and streets safe for its citizens; it ignores the environment and does nothing to check pollution of air, water and other resources.
No, Prime Minister, we are already doing our best for nation-building. It is time the government repaid some of our generosity instead of asking for more charity through emotional atyachar.
You manage your finances, and let us deal with our kitchen and conscience.

They should curb their expenses.

Wealth tax ,corporate tax reduced for rich n corporates asking middle n poor class to give up subsidy.nowadays trend is preaching by rich n powerful to poor n weak to give up what they never give up.

this governament lost people's confidence and its credibility. MPs get everything subsidised with more salary . salaried class asked to give up priveleges. its shameful. should face delhi like situation in other states going for polls.

we want everything, but not willing to giv anything. we want govt to work but ourself want min work. shame on this attitude

Let us forward this to : 1) the chief justice,supreme court, 2) the speaker, lok sabha and wait for their reply. What else we all could do when the KING is taking anti people decissions. But, facts and statistics already LBWed the governance.

Prime Minister has no guts to ask the M.P.s or MLAs to give up the hefty perks they are enjoying at the cost of middle class or poor people of this country. He is busy in dressing up for photo shoots, tweets and foreign trips to cost public exchequer. Their spokes person and so called leaders telling huge lies and making fool of the people of this country. Practically they are up to neck in dirty politics.
Common citizen must realise what is exactly going on and what are their real int

I am the most favourite of BJP ans RSS butthe the way Modi is playing murky politics is very unfortunate. He should strat his commitment for National building from political leaders from the their fast foods instead the bread and food of middle and low class lot

If some one wants to eat food coocked with subsidised gas......god bless him. So u want Tax reduction, subsidised everything, no work -great pay.. Modi is just a mortal......Even god can't help India...