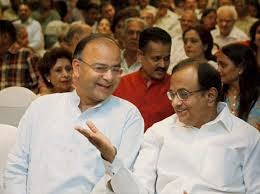 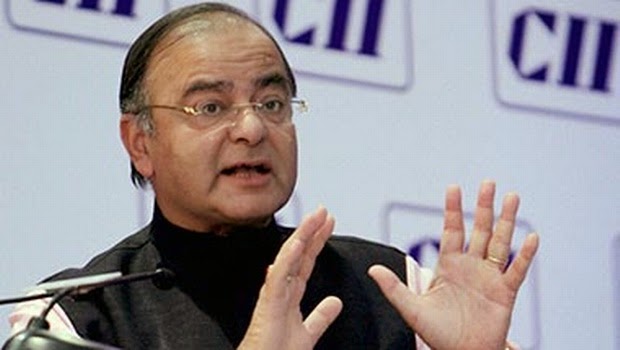 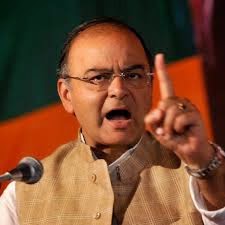 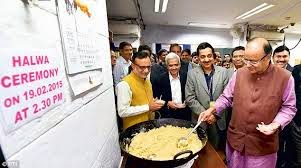 Finally our Honourable Union Finance Minister wakes up and opened his mouth on Bank Employees Issue.
Whether he is unaware of this issue when we strike work for 5 days during last 27 months?
Why he is appealing now not to go on strike?
It is timing of the strike.
It is number of days of strike call.Is he appealing or threatening?


He says strike is not desirable and affordable in the interest of Nation.
When crore of rupees gone to the write-offs and provisions,
is our Nations interest protected?
Is it not amount to looting of hard earned profit ?
Is this profit not belong to people of India?
What steps this or previous Governments taken to stop this looting by big corporates?
What is our Minister"s appeal to IBA ?
We want respectfull settlement and not Halwa!
Comrades Unite. Show our strenth.
Brush aside our differnces for some time.
UFBU! we are with you!
Go ahead !

The Finance Minister Shri Jaitley said that participating in the proposed strike is neither desirable nor affordable in the interest of the nation. Making an another appeal to the employees of PSBs, their Unions and Associations, the Finance Minister asked them not to resort to such disruptive means, and call off the call for strike.
Posted by Indian Bank Kumar at 12:10 AM

Welcome com CHV. to do your role in the drama you staged for the "n"th time with your script of ' with a positive approach of I B A and Hon. Finance Ministers request on national interest the UFBU unonimously decided to put on hold the proposed 4 day strike from 25. ' Let the poorly paid pressure mounted stressdriven banker who could not face his family on the day light. in any working day to face the familx faceless

No Mr. Indian bank kumar we are not with ufbu. These bastards have sold out the interests of the bankers time and again. Is there any rational reason that the 4day strike was called off by ubfu? Ubfu bastards say it is because iba had assured of a good wage increase and that negotiations will be concluded before 15feb. Now Mr. Indian bank kumar what has happed to these promises? Was it the first time that iba had made such a promise that ubfu bastards easily believed them. No.... It is because ubfu bastards have been bought by the govt. They have been ordered by their masters to delay the negotiations for as long as possible.. Mr. Indian bank kumar when will you open your eyes and see these ubfu bastards for what they really are??? .... When will you stop preaching sermons on how great unions really are? These shitty unions only know how to play politics and nothing else. To all the aam bankers I say to you the wage negotiations have already failed. You will not get a just settlements. So ignore this call for strike. Cancel your union subscription and spit on the faces of union leaders whenever you meet them. Treat them like the dirt that they really are

Looks like Kumbhakaran has finally woken as the budget session is set to begin.

even we loss more salary we are ready to participate in strike. before 50 years how was the lives of teachers, today workmen in banks lives also like that. any employee hopes to lead his family life as well as his social life in respectful manner. banks are every time crushing us to work more efficiently like sugarcanes in the crusher. banks need only our efficiency towards its profits. how throws sugarcane extraction after getting juice, in same manner our banks also treating us. one of the shameful job in the country is bank job.

Mr.FM is in a hilarious mood to crack a joke. Well. The families of 10 lac employees nearly begged to listen to their woes for the past 27 months. Everybody turned a Nelson's eye till date. FM is enacting a political drama to draw the sympathy of public and nothing else. Let us be united and face anything

I think this whole episode is a ploy. It seems everything is planned. In my view, efforts should be taken parallelly for 5 days week as well. Nothing to hear on this from either sides.

Atleast now after nearly nine months of BJP government our union finance minister (back door entry through Rajya Sabha) come to know that bank employees are going on strike and are waging war against wage revision. Instead of advising UFBU indirectly not to use strike as a tool weapon let him appeal to IBA to sincerely negotiate with union representatives and pave way for meaningful settlement. As for ss UFBU is concerned every effort should be made to clinch this opportunity and in the ensuing full day full team negotiation to be held tomorrow to achieve all our charter of demands placed before IBA. Any dilution of demand shall be detrimental to the future of Bankmen. Your negotiating skill is tested. Remember you are the same people who are pary of earlier two negotiations. Be assertive and do not succom to Govt. Pressure. Be prepared for any eventuality even imprisonment (UFBU LEADERS) and we reassure that all bankmen/women , their families will follow you and fill prison. Do not let us down this time and discuss before 25/2/15 and settle the issue. Do not call off strike getting fslse assurances from IBA/GOVT. Remember our pasr experience is our present guide. Hoping the coming week shall enlighten all 8 Lakh bank force. UFBU ZINDABAD - ULTIMATE VICTORY OURS

Else where in press it is reported that 5 day week not accepted by Govt,regulated working hours not feasible,IBAsays banks cannot offer more than13.5%.FMappeals to calloff strike.Union leaders cannot gauge the feelings of its own members and understand ground realities.Finally it is going to have bearing on morale,performance of employees Sufferer will be organization and public.The Contribution by socalled IBA & UFBU will be not zero but negative in all fronts.Great achievement by spending time of couple of years.Time will move on .Definitely it is not employees who caused the NPAs or they want strikes.But now a days success of strike or bandh,hartals can be understood by element of violence or amount of inconvenience to public.Phone bill not paid service stopped Electicity bill not paid connection cut .Loans not paid pressure on small people Big advances availed by big people not paid OTS,Compromises and provisions from profits.Courts can have vacations with number of litigations pending decades.A Sincere pay commission under a leaned judge could have brought out a true report in 2 years with facts.Both IBA and learned UFBU Leaders are learned and well knowledged but lacking basics.There is lot of misunderstanding,lack of faithamong them selves .I donot think miracles to happen but PSBs ke liye certainly not good.

jaitlay has no moral right to preach bank employee.he should have told his subordinate to clinch the issue without delay.he should have rebuked his iba dallal for taking so much time to solve the issue.he should have ordered his chamchas to take action to prevent strike for national interest.this type of arrogance we have seen in upa now followed by bjp.people of delhi have taught them a lesson but still arrogance has not gone.modi and company will face the fate of upa is now clear.

It is regretted that the unions are also pegging/begging for .5% or so. Why they are not firm in demand on at par with Pay Commission or go for indefinite strikes immediately on end of previous date of expiry of settlement after advance reminders or notices. Banking is the only industry wherein losses are huge in case of stiles not only for public/government but also for striking employees to since No Work No Pay concept applicable. No striking Emploees are losing their wages except industrial workers and it is unfortunate to have and treat banking people too as workers. Further a retired peon or class IV Emploee of Govt could get the benefit of every revision of wages whereas a retired bank Emploee would get pension calculable on the date of retirement only. Still worst is the case of RRB EMPLOYESS Wherein no pensionary beinefits available. Lacks of such people of RRB Emploees would totally suffer a lot for survival after retiring from services after 60 years so and after putting 35-40 years of life and services. Who cares on these sincerely and constructively. Neither any association nor the government are worried about these. God only need to save. K. Krishna moorthy Advocate Chennai

It appears from reliable sources that 15% hike and holidays for 2nd and 4th Saturday agreed.

seems the drama is over, news of agreement at 15% hike is doing rounds... two and a half years drama for just 15%