Saransh Srivastav, an officer at State Bank of India, Kanpur, initiated the Facebook group to rally support for their eight-point demand charter.

Speaking to TOI, Srivastav said, "These are long-pending demands, but bank unions have been doing nothing about them. So, we decided to form this group which has members irrespective of their union affiliation or grade. This group is independent of existing bank unions."


However, the only bank union supporting the group is that of the RSS-affiliated BMS, said Ashwani Rana, BMS member and vice-president of the National Organisation of Bank Workers. He was present at the protest site at Jantar Mantar on Saturday.

YIBA's demands include immediate settlement of wage revision for public sector banks on a par with central government (CG) employees, five-day week, a commission to look into equalization of pay with CG employees, minimum wages for canteen boys and counting years spent in military service (for ex-servicemen) while fixing their pay, seniority and retirement benefits.

"After the Centre launched the Pradhan Mantri Jan Dhan Yojana, bank employees toiled late hours to open about 1.5 crore accounts in three days. We don't mind working hard, but we should get a decent pay as well," said Sandeep Wasan of Bank of India.

YIBA members rattled off figures to highlight the discrimination. "An LDC clerk of the central government earns about Rs 23,000 at the entry level while a bank clerk earns Rs 14,000," said a YIBA member.

Friends,
In today's leading newspaper it was published that YIBA called this dharna or protest, we strongly condemn such news.
We have already provided our clarification that YIBA did not call any demonstration and YIBA has no relationship with the people doing such dharna or protest.
YIBA is only a forum to help friends and we as YIBA never opposed any union but we keep our views.
meanwhile we shared some photos related with Dharna but in view that we share all views.

Friends,
It is being popularized that YIBA called a Dharna or a Demonstration at Jantar Mantar Delhi,
We as YIBA want to inform you that the whole credit of this Dharna/Demonstration goes to some bankers who are protesting and YIBA does not claim any.
We also request our members that please don’t post anything on the name of YIBA .

Well you might have heard/read the news item of a bank employees rally
on 13.09.2014at Jantar Mantar!
I have posted the three news items above.

May doubts are…
1. The posters have too many mistakes. Is it prepared by the young generation bank employees?
2. Some of the persons sitting in the dias seems to be “too young”
3. The posters have no name of the any group/forum/union or and coordinator/leader.
(Because a rally can’t be arranged by a single man)
4. What is the amount spent and how the funds were raised and who contributed the money?
5. It seems NOBW union’s support is there for this rally.
NOBW is still a constituent of UFBU and participating in wage negotiations till date.
Then what is the reason behind supporting the group?
6. What is ultimate goal of this group? Only to achieve higher wages and nothing else?
Whether these people have resigned from their respective union? Will start a new union?
7. Why YIBA-facebook group’s name is used (when they have not arranged for the rally?)

The only subject which dominating the minds of young bank employees is substantial wage hike.
They will be attracted towards anyone who says “Join with me, I will  get you higher wages”
Do you heard about “Catch them young “policy?
(Brainwashing or injecting one’s own agenda in the minds of youngsters)

My requsest to young generation Bank employees is:
Come forward and participate in union activities.
Change Union or union leaders if they are not leading you satisfactorily.
A vacuam in leadership will be created in the near future, as all seniors are going to retire
within 5 years from now.
I am of the firm view that without union, employee’s job security, service conditions and wages can’t be protected.
Hence union movement should not be let up at any cost.
You must see that why foriegn companies starting their business/Factory in India
ask excemption for not following labour laws and not allow forming union in their concern.
If you feel that unions are waste, then why are they fear about the unions?

To get a good settlement, Please give pressure to your union leaders
(local/district/state/central level leaders of your union)
The following message by SMS
“Don’t accept below 20%. We are ready for any struggle.”
I hope you will have courage to mention your name, bank and branch in the message.
If you say “I have no contact numbers”, Then I can say, you are distancing yourselve from union activities, but want the union to get wages equal to central Govrnment employees, Is it not? 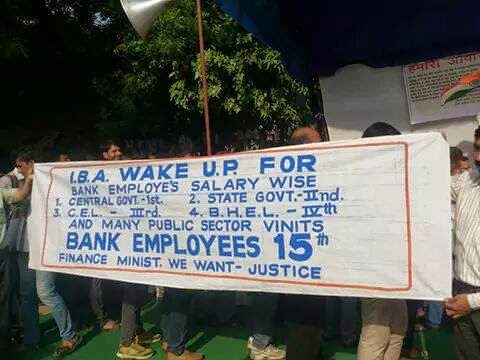 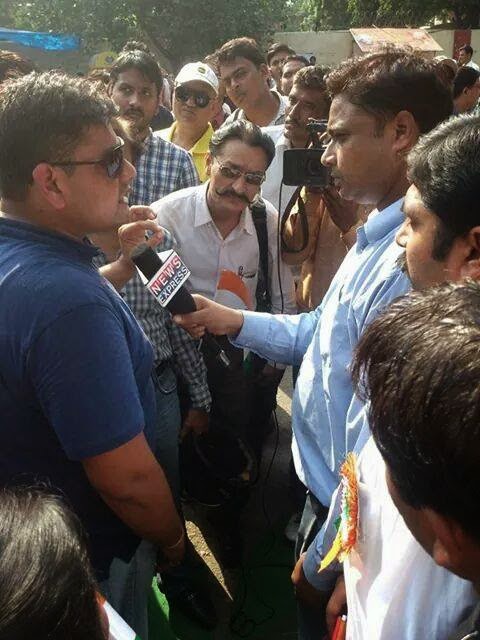 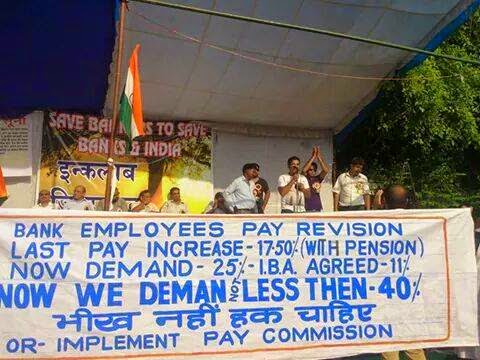 Rather than finding the negatives, be an optimist and post some positive points you have observed about the agitation. The news of the agitation had started coming nearly one month before. But, your blog has not mention any thing during this period about it. Now, when so many young bankers had gathered at Jantar Mantar, instead of encouraging, you are finding negative points about the agitation.

dei , union walas are chors and lkb ... what to expect from sukers and morons .. shoot them down ....they are craps ...u die with these morons ...we want freedom from so called unionist loafers and chamchas lkbs and gaandus ...tuh mar jaa saale chuthiyaa union ka supported

Very good I REALY WITH YIBS

YIBA will soon takeover the old union .
They are doing things which should be done by union way back.

Now its only YIBA please support

Around 25-30 years ago banking job was among first five jobs in India. Now it tries to find its place in the bottom line. Payment substantially decreases and amount of jobs increase substantially after the computerization also. branch increases man power same. NPA increases profit downwards. Number of a/c increases, 24 hours in a day is less for a banker to day to day job in many places, still no overtime, no bonus, no family life.
Were the union leaders sleeping till dates. Were management sleeping while giving loan? What Government is doing for all those defaulters like KFA directors who is still moving with collar up.
Everybody wants to save its tenure.
government/ Party requires vote.
Management requires business by hook n cook
Unions (with broken tooth and nail) requires month end contribution and sometimes showcase their presence.
that's all.

Look at the positive side....many of us don't know the structure of union ........no moron union tried to reach young bankers..........all these craps are doing of posting their favourites to preferred location........this is the only activity of union

If NOBW vice president was present in the meeting then why this drama and hungama. his party is running the government and he can directly take up the matter with FM and solve the issue

Union babus are playing double dirty game with their fello ppl, one side are liking feet of finance minister other side are begging for bankers .why don't they take hard steps to show unity of bankers they are seeung their own intrest not of poor working bankers .come out all bankers you are not beggers demand what you deserve .unite and fight for your legetimate demands for ur kids family ,come out so that your kids can proudly say my father or mother ie a banker not a beggar fight for your rights ,your childrens better future .a banker can't send his kids to good school ,bankers just live a compromising life,stand up demand what you deserve this the time now or never.

Dear friends all young banker with you.

Dear Sir, you have told everything you think about YIBA. Have you serious twice why this YIBA came out when there are lot of unions. Perhaps No!. What are our union leaders are doing since 01 Nov 2011. Further, you have wrote that "What is ultimate goal of this group? Only to achieve higher wages and nothing else?" I am not in possession to think that how you have used such shame & useless words against the YIBA. I am also ex-serviceman but still like to young blood. If you will be our leader bank employee should have wait for wage revision till 99/99/9999. Do not raise so many questions about YIBA but search the reasons behind forming of YIBA. Further, UFBU
demanding 25% but you saying 20%. What a beautiful demand!!!.
You also advised to send SMS like this “Don’t accept below 20%. We are ready for any struggle.” Will you tell us what struggle you have made since 01 Nov 2011. Perhaps NOTHING. All the union leaders should be kicked out on the road only than we accept reasonable wage revision.

Old unions sucks. They Lack energy to do any thing. So it's our mistake to except any thing from them.