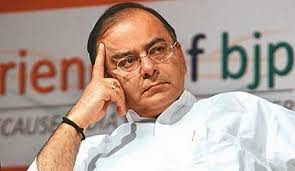 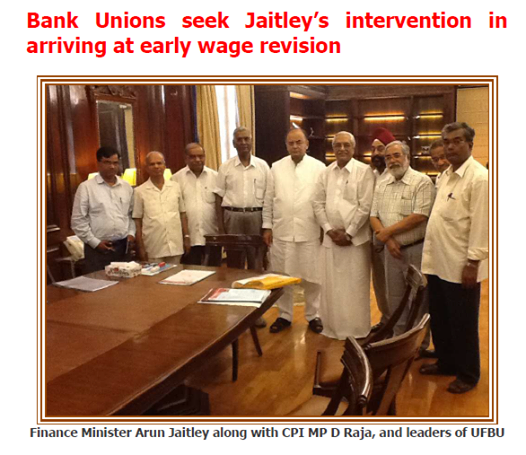 Representatives of the trade unions of public sector bank employees on Friday met Finance Minister Arun Jaitley and sought his intervention to ensure early settlement of negotiations on wage revision.
Jaitley assured representatives of the United Forum of Bank Unions (UFBU) Financial Services Secretary R S Sandhu would look into the matter and the settlement process expedited, union leaders said.
General secretaries of nine employee unions under the UFBU were present at the meeting, along with D Raja, member of Parliament from the Communist Party of India.

Posted by Indian Bank Kumar at 9:41 AM

Like ex FM Chidu, the Present FM will sing the same song "Banks are not in a position to pay more pay to bankmen". That means "same old wine in new bottle" or "same pill in a different pack" This is because, only the FM is new, the other secretaries in the MOF are old.

why we are not going for strike

Bank unions lost their bargaining capacity in the negotiations because leadership has become weak, there is no second line leadership in the cadre due to this bank men are suffering like any thing they don't have proper calculations when central govt and other govt employees getting more wages UFBU failing to project these figures in the negotiations it seems.

at present since 2001 onwards bak officers are suffering like any thing working conditions are become worst no body is talking about this now bank officers need peaceful working condition in the industry a branch manager has to bear multiple responsibilities top management want bank men to compete with private and foreign banks without proper amenities Branch Manager is responsible/accountable for every thing.My suggestion to all the Unions first concentrate on the strengthen of the union in the units develop strong second line cadre and conduct training classes to the youngsters to enhance the knowledge levels of trade union activities automatically we can achieve every thing.
LSRK SARMA

Student-> works hard and studies well-> gets good marks-> Qualifies in UPSC/PSC/Government organisation exams-> becomes a Government employee..They are enjoying the fruits of their hard work..They become Gazetted officers. .with the power to Attest...I really envy them..