AIBEA has at last issued a circular on DECREASE in Pension for those retiring in 10th B.P.S.
First of all, I thank AIBEA for having accepted my (or comrades like me) calculations and its effect on Pension for those who retired between 01.11.2012 to 25.05.2015.
The calculation by AIBEA is given below as image.
In their calculation they have taken retirement date in 2014 and Pension as at May 2015, to minimize the loss met out by pensioners and also to minimize the recovery of Pension from arrears.
Even then they are not able to show a plus in revised Pension.
To solve the problem they suggest investing the amount received as commutation arrears
and make up the loss. Even after foregoing the commutation arrears, Pension is not increased by 15%.
Any employee with minimum mathematical knowledge will not accept this suggestion.
Let AIBEA or any other union need not advice whether to go for
commutation arrears or not.

Let them not advice what to do with commutation arrears whether to deposit or use the funds for marriage of employees’ son or daughter.
Let the employee decide it according to his convenience.

One simple Question, why such calculation and circular was not issued at the time of 9th B.P.S.?
There was no necessity to issue such circular because Salary, Pension, Commutation, Commutation Arrears all are positive/plus at that time.
In Every B.P.S,  D.A is merged with Basic Pay. Because of that every time employee will get commutation arrears.
10th B.P.S. is not an exception.
This time Salary, Commutation, Commutation Arrears are positive/plus, but, Pension becomes negative or reduced.
Why this situation?
Everybody knows the reason.
That is the victory of IBA in restricting the load on Basic Pay to 2%.
( I don’t want to use the word defeat of Unions, as I still want the Unions should not be defeated)
This decision will affect those who already retired, going to retire, and above all , the young generation employees Under NPS scheme. They are having another 30 years of service. Calculate the loss for them due to reducing the contribution to NPS scheme every month.
When AIBEA give suggestion to pensioners for make up the loss,
What is the suggestion for employees under NPS scheme to make good the loss?

Without accepting this fact, giving wrong suggestions to pensioners/employees will reduce the credibility of unions among employees.
Please make the newly introduced Special Allowance eligible for
Retirement benefits, if you can.
Reopening of Bipartite settlement is not new. It happened in the past.
Otherwise it is better to keep silent on this issue, than to cut a sorry figure by giving awkward suggestions.

I wish to repeat what I said earlier about this issue:
“Make soup, by cutting the tail of dog, and give it to dog itself!”

“I asked for a Horse. They give me a Donkey. I objected. Then they give me again a Donkey written on the back of it as “Horse”.
I am not blind. I can see which is Donkey and which is Horse” 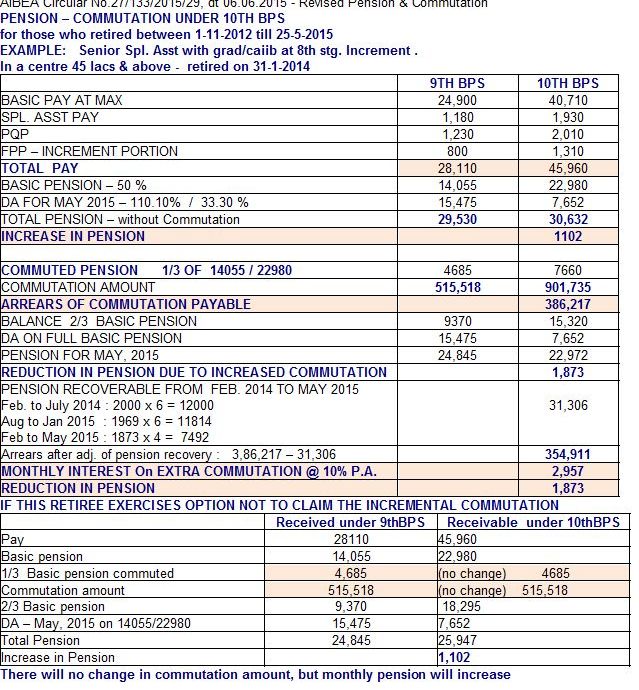 Posted by Indian Bank Kumar at 1:06 AM

Let aibea / aiboa / UFBU keep quiet. Retired bankers know something about the calculations
They have failed miserably in this settlement in total Why give all the calculations. It is nothing but rubbing the old wound and making it big

thank god the LEADERS of AIBEA have not chosen to advise not to opt for commutation so that the increase in pension will be more than 25%. The leaders are thinking that the retirees do not have any knowledge about the calculations. It is high time the leaders accept their total surrender to IBA instead of trying to pacify the comrades by such silly calculations. The leaders are worried about the levy and hence are blabouring like this.

Your efforts in exposing 10th BPS for not caring the interests of the
employees retiring after 1st Nov,2012 are commendable.

In fact no illogical clarification can satisfy the sufferers
Even if the interest factor for the additional commutation is considered,
the decrease is not covered. And why they do not consider the intt.
earned so far oh the commutation received by the retirees under 9th BPS.
The loss will be much more higher.Instead of be fooling its members,
it is still time to correct the shortcomings of the settlement.

If unions are not to be considered defeated, I term it as a self defeat by unions themselves. Let these leaders not teach us arithmetic nor handle sessions on investments as these explanations are only fallacies. Mere 2% load for BP (13% for salary components not ranking for terminal benefits) coupled with disproportionate reduction of per - slab DA percentage have lead to this pathetic situation of retirees facing reduction in pension, which no industry would have witnessed worldwide. CHV cannot have any plausible explanation to this disquieting state of affairs.

The idea given by union and association leaders that increased commutation will offset the loss of decrease in pension is illogical and shows the lack of calculation skills of the leaders.The retired employee refund the commuted amount with with interest.So it is not the charity given to the retired employees.The have betrayed the seniors and the lost the faith of working employees also.Better the negotiating team should resign inmass
ans give chance to youngsters

Dear Comrade, the feeling of the entire bankers is brought in your column. We do not want the Union to be defeated. At the same time Union Leaders should not support the 'big brother' and stage a fight against the employees and safe guard the evil designs of IBA. We will reopen the BPS and fight for justice. As suggested a simple notification announcing the spl.allowance eligible for superannuation benefits will solve the problem. Union leaders should not feel any loss of generality because we comrades stand united till date. Let us continue our unity.

The ultimate solution is to reopen the 10th BPS and get all benefits on newly introduced special pay/grade pay at par with govt. employees like PF,NPS cont.,Superannuation benefits,Hra ,if our leaders can do this instead of making non sense arguments on there wrong doings than only it will be better for bank employees.In past we have remember BPS
was reopen to make good to emplyoees.

It's a great settlement. Because retirees are best affected .

FROM THIS AMOUNT EXCESS PENSION [AID WILL BE RECOVERED.AFTER DEDUCTION
REMAINING AMOUNT WILL BE RS.318000.00 +

AGAIN THE UNION IS MISLEADING THE MEMBERS.

THERE IS NO NEED TO GIVE ANY EXPLANATION/CLARIFICATION NOW THE MEMBERS ARE NOT FOOL.WE KNOW VERY WELL WHETHER TO TAKE COMMUTAION DIFFRENCE AND WHAT TO DO WITH THSESE FUNDS.

AIBEA SHOULD ACCEPT THE MISTAKE( KNOWINGLY DONE WITH COLLECTIVE WISDOM) BY THE SO CALLED CARE TAKERS OF EMPLOYEES AND STOP PREACHING.

In other industry, had this kind of betrayal happened, the leaders would have paid the price for the betrayal. Since, we know working for unlimited hours, we are patiently listening words such as, partial commutation, non-existence of contractual binding, welfare measure etc. The sad part is UFBU leaders are still coming out with some explanation or other for the reduction but not admitting the mistake.

Why only to consider for the pensioner issue
When nothng was done even for those still serving the bank ...its a total hopeless settlenent when young bankers will only get an increase of about 2-3 thousand whereas in the govt sector junior offcer are getting more thn 50000 ....and now they are finalising 7th pay comm......where are we ?????are we worthy to be called officer or choukider!!!!!!!!! Mr kumar what is your view as a banker????////?//????

Commutation is our pension money which we part with in our basic pension and is restored only after a span of 15 years....it is our money....

Nowhere in the history of employees wage revision there is decrease in pension due to commutation....commutation is our part of money...

Let the union leaders show one wage revision whether in Banks or any organizations including Central and State Governments reducing pension because of increase in Commutation. This is wrong concept and let them agree the mistake committed by them and REOPEN the 10th B,P,S and see that the Special Allowance is eligible for Superannuation benefits to rectify the Anomaly.

If the same team of IBA and UFBU continues for next wage revision pension may be deprived by inserting a clause to opt for Commutation, Gratuity, PL encashment P.F contribution OR PENSION. Then the Union gives calculation stating the retirement benefits will be around 40 lakhs and if the same is invested @10% per anum the returns will be more than pension justifying their stand.

This is on very high side. If it has to happen UFBU may not be a party to the next wage revision.People may see introduction of Nanking Pay Commission for justice.

The 10th Bipartite Settlement of the Bank employees is preposterous. The IBA and UFBU have cheated the serving and more disastrously the retired and the employees who have sought voluntary retirement after completion of twenty eight years of service with the benefit five year’s weightage. It is unheard of that pay revision brought less pension to the retired employees. A person who is drawing pension Rs.21,000/- per month at the rate of 110.10% DA will get a reduced pension of approximately Rs.19,000/- at the rate of 33.30 % which is applicable now. The employee who took voluntary retirement on 31.1.2013 will get a reduced pension by an amount of Rs.2000/- from February, 2013 and it will continue till June, 2015 which works out to approximately Rs.60,000/-. Pension for the month of July, 2015 is yet to be disbursed, however, it is presumed that the amount will be Rs.19,000/- which is less than the pension he/she got for the month of June, 2015. The leaders and the representatives of the management should have applied their brain before coming to the conclusion. This is really disgusting.