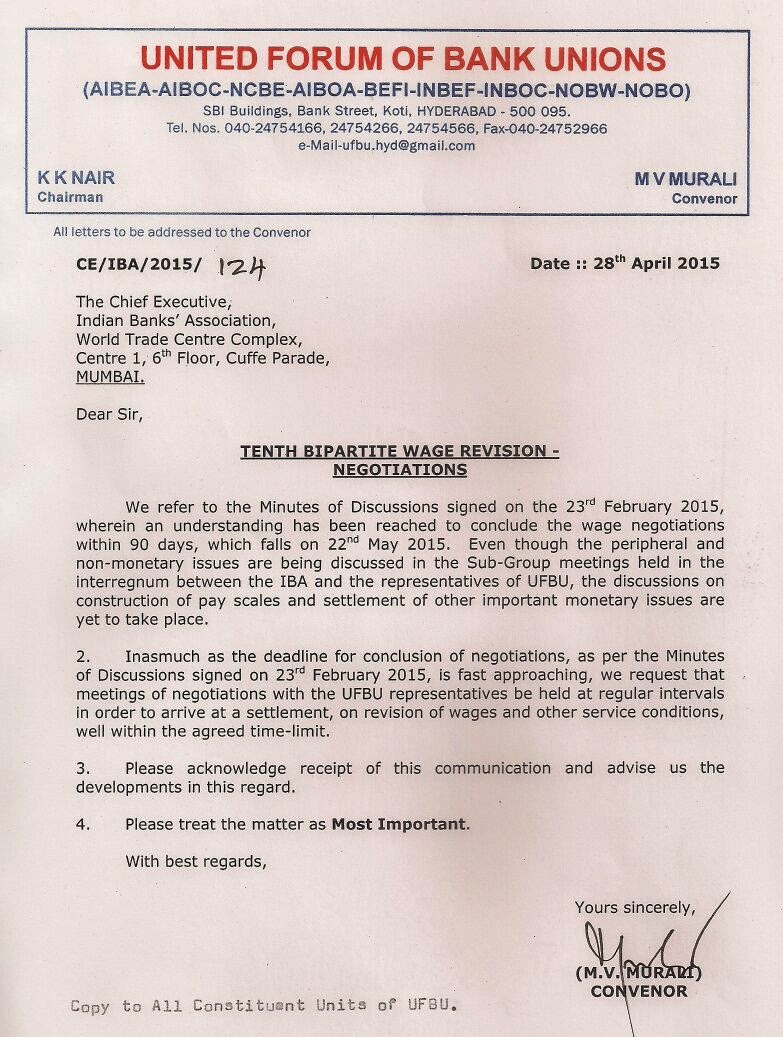 Union missed the chance of using indefinite strike of 16 mar'15. union leaders are sole responsible for delay Not IBA. Now union lossed its power against IBA.They cant even disclose what was happened in last meeting. Dont issue circular against young generation.Remind letter should be sent earlier in march not now to fool employees. put a condition in this bipartite settlement itself that negotiations should not go beyond six month from due. All should think about time value of money. I hope this will reach union leaders. A good leader will add this condition.

Im tired of this conversation btween iba n ufbu....
Settle the metter ASAP else we will ask for interest in our arrear..

Let Union Leaders lead by CSV lick the boots of IBA Chairman and other members. So called trade union leaders sold bankers for paltry sum and got huge benefits for themselves. Zindad Zindabad AIBEA AIBOA Zindabad. Trade Unionism Zindabad.
There should be a strict restrictions on union leaders that only existing employees should lead. Not old tired donkeys once considered as horses.

Its waste of time to discuss about settlement. Everything is already planned. Unions are just playing drama.

THE NOTICE FOR INDEFINITE STRIKE FROM 23 MAY SHOULD BE GIVEN

draft of the settlement is ready. iba will call ufbu on 22nd may and place the same on the table. ufbu leaders will just sign on the dotted lines without any hesitation as they have got 15% increase which is a historical settlement in the banking industry. PL.DO NOT PAY LEVY. INSTEAD DONATE FOR NEPAL RELIEF FUND.

Yes this time lets say no to levy..and protest against retired one being union leaders...

I don't understand how IBA is managing to control UFBU which constits nine unions for such a long period of two and half years. Is it a drama between them? Whats happening? Nobody knows.
How long they test the patience of lakhs of existing employees and retired seniors?
Are they not God fearing?
Don't they understand that such a long delay on settelling the issues of the bank employees will reduce the quality of the in the banks?
Is it a deliberate delay?
Will there be happy ending ASAP?

Union are just fooling members,they are just like politicians,thinking about there personal benefits

When will be next meeting between Iba & ufbu held?

LET US FILE SUIT AGAINST IBA
FOR NOT HONOURING WHAT THEY HAVE
PROMISED. THIS KANJOOSE MODI GOVT
WILL NOT PAY ANY WAGE INCREASE
TO BANK EMPLOYEES WHO WORK LIKE
SLAVES ADVERTISING THIS YOJANA
AND THAT YOJANA AND TOILING HARD
FROM MORNING TO NIGHT. LET US
VOTE OUT MODI AND HIS CLOWNS
AND THROW THEM INTO GUTTERS LIKE
THE DELHI STATE PEOPLE DID.

Earlier the settlement was due after every three years,but from 4th or 5th Bp settlement the period of settlement was raised to 5 years on the condition that the negotiations for next BP settlement
would start 6 months before expiry of earlier settlement and be concluded on or before due date.But this never happened,every time the settlement was stretched to 30-36 months and concluded hurriedly with paltry increase.Union leaders never compared wages with govt. employees,they were under impression that the bank employees are getting best wages.so when we compare with 6th pay commission there is large gap.This gap is not overnight it is happening over the years during which our so called leaders were in the nandanvan of fools.They had lost credibility,bargaining power and collective wisdom.Most of the leaders are retired from Bank's service but still not vacating the posts in the union because of huge kitty of the union which is collected from members via leavy,donations,yearly fees.What they are going to do with these funds ? For whose benefit the funds will be used ? and When ?Ask these questions obtain explanation.Participate in the conferences of the union and make a important change in the union constitution that only servings members will represent the union.The office bearer of the union should vacate the post the very day on which he retires.Only then the interests of the serving members will be protected.Until this change is made in the constitution donot pay any donation,leavy and membership fees.Show the door and kick out tired and retired leaders.Unless thsese changes are made there is no bright future for bank employees.

NOW MANY BANKS ARE DECLARING RESULTS AND PROPOGANDA IS MADE BY MEDIA AND GOVT THAT PROFITS ARE DECLINING BY WHOOPING 40 TO 50 %
ON THIS GROUND THE GOVT WILL PRETEND THAT HIGHER WAGE REVISION IS NOT POSSIBLE.IT MAY BE NOTED THAT OPERATING PROFITS OF THE BANKS ARE INCREASING BUT AFTER PROVISIONING FOR BAD LOANS NET PROFITS ARE SHOWING DOWNWARD TREND
FOR WHICH NOT THE BANK EMPLOYEES BUT
THE GOVT AND BANK'S POLICIES ARE RESPONSIBLE,BUT THE GOVT IS BLAMING EMPLOYEES.OUR UNION LEADERS ARE BEHAVING LIKE THREE MONKEYS EXACTLY IN OPPOSITE
SACH MAT KAHO
SACH MAT DEKHO
SACH MAT SUNO
IN ADDITION TO THIS BANK EMPLOYEES ARE OVERBURDONED WITH ADDITIONAL WORK OF GOVT SCHEMES WITH MUST ACHEIVE TARGETS.EVERY ONE IS RUNNING AFTER TARGETS AND
NEITHER BANK EXECUTIVES NOR UNION LEADERS ARE PAYING ANY ATTENTION TOWARDS HARDSHIPS OF BANK EMPLOYEES.THEIR MOUTH IS STACHED
BY GOVT & IBA (GUESS WITH WHAT?)