Workers from across sectors begin 3-day dharna in Delhi

In a statement, the Joint Trade Union Platform formed by 10 Central trade unions and independent federations, said the “mahapadav” (mega dharna) in Delhi was because successive governments
had failed to concede demands being raised over the last eight years.

“It is a step towards preparation for the next higher phase of united struggle, including indefinite countrywide strike, if the government continues to ignore the demands of the workers and proceed with its pro-corporate agenda,” said a joint statement issued by the Congress-led INTUC, SEWA, Left-led CITU, AITUC, Hind Mazdoor Sabha among others.

Flaying the Modi government’s bid to promote “ease of doing business” by bringing in “pro-employer amendments” in labour laws, the unions said “the text of the Code on Wages Bill, Code on Industrial Relations Bill, Code on Social Security Bill, Factory (Amendment) Bill etc were designed to push the overwhelming majority of workers and employees out of the regulatory purview of most of the labour laws, curb workers’ right to form unions and dismantle existing social security provisions.”

Participating in the dharna, HS Sidhu, General Secretary of Hind Mazdoor Sabha, which heads the largest railway union, warned the government of a “fierce battle from workers if it goes ahead with the sell-out of the Indian Railways.”

Decrying demonetisation and “hasty implementation” of the Goods and Services Tax, the unions said: that “demonetisation…has further depressed wages and perpetuated closure of industries,…particularly the unorganised sector, the SME sector and the small traders and peasants,” adding that it had also aggravated the miseries of people through fuelling price rise and jeopardising services, trade and various occupations.

“It is very difficult to go on living with such high prices and no job security,” said an anganwadi worker from Assam. 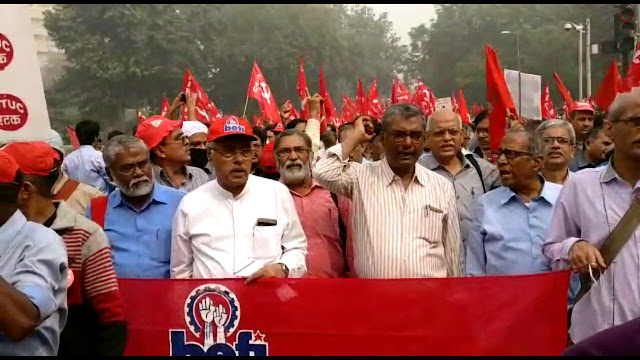 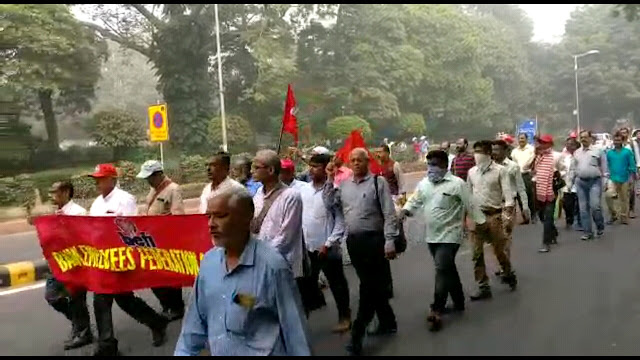