RBI head must quit for havoc: 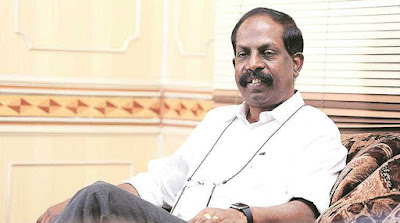 A TOP leader of India’s largest confederation of bank officers has called for the resignation of RBI governor Urjit Patel, whom he held responsible for causing “havoc” to the economy with the unprepared decision to demonetise currency.
D Thomas Franco, senior vice president, All India Bank Officers Confederation which represents over 2.5 lakh senior officers from all nationalised, old-generation private sector, cooperative and regional rural banks in India, told The Indian Express that it is the RBI governor who should take moral responsibility for the crisis and the deaths of people including 11 bank officers in the last 12 days.

Franco said the government could have taken lessons from other countries and from its own demonetisation drive in 1978, when then RBI governor I G Patel had advised the government against the move. “We all know that neither Prime Minister Narendra Modi nor Finance Minister Arun Jaitley is an economist,” Franco said. “We have economists in RBI to take the right decisions on matters relating to economy and people’s lives. The present governor has utterly failed in his role by taking a crucial economic decision without planning, which has brought havoc to the nation’s economy and lives of the majority.”


About the shortage of Rs 100 notes, he said, “What we are getting is mostly soiled notes, reintroduced by RBI because of this crisis. As detection machines reject most of the soiled notes, it is another herculean task for bank officers to sort these out manually. Had there been a little planning, they could have printed Rs 500 and Rs 100 notes instead of printing Rs 2,000 notes. Does it mean these economists have no clue about how transactions work and currency travels in a country like India?… All the soiled notes have to come back again as they are meant to be disposed.”

Franco cited reports of “misery and despair” from the ground. “People are crying at bank counters. Eleven bank officers have died due to stress. An average bank officer has been working up to 16-18 hours… Officers in the ranks of joint custodian in the currency administration cells in banks are the most affected. Many of them couldn’t even claim a half a day’s leave after working 18 hours for 11 consecutive days,” he said.

“It was very, very poor planning on the part of RBI that has led to this crisis. They did not even have a roadmap. Those who sat and rolled out the demonetisation drive didn’t have a basic idea about how the Indian economy works and transactions happen. We understand that there were no discussions with experts and stakeholders before they took the decision,” he said.
“RBI has to now count and verify all these banned notes again. When we talk about deposits of several thousand crores, we do not know how many of them were forged notes. Collection of old notes in bank branches is being done in a hurry due to heavy crowds. Before they took the decision, the total currency status in all the banks and branches in the country was a single click away for them,” he said.

“The administrative hierarchies too have derailed. It is strange to see that economic affairs secretary Shaktikanta Das is announcing many decisions including the use of indelible ink without any authority while the finance secretary is mum,” he said.

“Moreover, RBI is not allowing cooperative banks to exchange currency. They are institutions with a total Rs 10 lakh crore investment and one lakh branches in the most remote areas of the country, serving a rural population of crores,” he said.
Franco said the economy is sinking; growth has been affected and think tanks predict immediate impacts will last at least 12 to 15 months.
.
Posted by Indian Bank Kumar at 10:13 AM

These are the real 'intolerant' ones and find fault with anything and everything this government does. When government do good people like you also will be there to criticise.

The Unions and IBA are fighting for their existence only while bank employees are siphoned of their deserved salary.
Prior to 1979, Group ‘A’ Officers of Central Government were earning less than bank officers. In 1979, the Pillai Committee was constituted to study the salary structures of bank officers and Group ‘A’ Officers of the Central Government and bring equity among various banks. The Pillai Committee recommendations[PCR] were implemented in banks with effect from July 1, 1979, and the pay scale of the Scale 1 officers in banks were equated with pay scales of the lowest of Group ‘A’ Officers of Central Government at Rs. 700. At the same time UGC also fixed the salary of an Asst Professor at Rs. 700. This parity which was established by implementing the PCR and UGC in tune with 5th Central Pay Commission [CPC] was distorted in subsequent CPCs to the detriment of bank staff. In the 6th CPC, the salaries of Group ‘A’ Officers zoomed past the salaries of bank officers. External relativity was given a quiet burial and the Unions trumpeted their achievements silently collecting 10 % of the arrears. In the 6th CPC the basic pay for Group ‘A’ Officers of the Central Government went up to Rs. 21,000 (basic pay Rs. 15,600 + grade pay Rs. 5,400) whereas the pre-revised basic pay of bank officers was only Rs. 10,000. Now with the implementation of the 7th CPC the gap widened to a shocking level.
Details Basic Pay /Band GradePay DA HRA@Metro Total salary
Grade 1 29900; 29900 - 104400 16200 merged 13464 [30%] 69564
Bank PO 23700; 23700 - 40420 1837 10879 2133 [9%] 38549

The above table depicts the colossal injustice done by the Union leaders & IBA to the Banking fraternity.
Worse still is the plight of pensioners..While it is told that there is a hike of 15%, there is infact a cut around 8 % for the pensioners retired between 1.11.2012 till the settlement making a cumulative loss of 23% [15 +8]. This is unprecedented and unique in any settlement..These unions are literally spoiling the better wages for bankers..Now after a long time Bankers in the entire country have exhibited their hardwork which is applauded by people & government..But silly accusations and belligerent remarks of such non working sixth fingers will vitiate the atmosphere thereby eroding whatever the goodwill the hard working bankers earned..Howlong our banker friends depend on such fair weather friends ?.

These are ppl who are telling the reality.. Rbi ppl dint prepare the ground.. No currency is printed.. Do u even have ne idea what misery cashiers have to go thru.. Shortage in cash ir fake note is paid by the cashier from there pocket.. Dnt speak if u are unaware abt the facts

These goddamned union leaders have fooled their brethren from the mid 1980's .They failed to protect and ensure fair settlements.The top leadership amassed wealth at each settlements while the rank and file got crumbs.

These goddamned union leaders have been befooling their brethren since the mid 1980's.They have failed to protect and failed to secure settlements in line with the Pillai committee settlements.The top leadership has amassed wealth at each settlements while the rank and file got crumbs.