No change on 7.75 %spl allowance,
loading only 2.50% even though fund will be available,
no change on retirees' issues. Nothing positive on 5 day's  week.
These are the major areas  of our difference.
In yesterday's  UFBU meeting also there was no decision to sign  without positive improvement on these issues.
*BEFI*
*******************************
BEFI should have acted like this in the last BPS itself.
However better late than never.
*************
My view reposted:
Thursday, October 10, 2019
In the last BPS, in the last minute a new concept was introduced.
Yes, i.e. only 2% out of 15% increase will be loaded in Basic Pay.
This decision was not disclosed to employees till the date of signing the minutes.
Till the last meeting between UBFU and IBA no word is uttered about this proposal.
Only on releasing of signed minutes employees  came to know this decision.
That is a back stabe by a union.
Other unions said they were not aware of this,
They have to sign on the dotted lines as prescribed by the Big brother and IBA.
But, this excuse is unaccepted by the members.
Instead , a new spl.allowance was introduced which will not be taken for retirement benefits.
Thereby member's pension was reduced by Rs.3000 to 4000 every month.
Computation and Gratuity are reduced by huge amount.
This concept affects not only seniors but also New recruits after 2010.
As their NPS contribution by Bank as well as employees will be reduced by 7.5% (spl.allowance and D.A.thereon) every month.
If you calculate for 35 years of service , and future increase in wage revision, annual increments & D.A., the amount will be mind blowing.
If we assume one employee covered 7 settlements for 35 years of service.
Then Seniors retired between 2012-17 will be affected by one time only.
Those retiring  between 2017-22 will be affected 2 times only.
But, recruits after 2010 will be affected in all the 7 settlement.
Hence the loss will be higher and higher.
Runs to lakhs and lakhs of rupees.
Why I am writing this at this juncture?
There is a reason.
In the last BPS meeting the proposal was put forth by IBA again this time.
But, UFBU is tight lipped about this proposal.
Whether they are opposing or accepting this proposal?
I want to remind , In the charter of demand by UFBU , it demanded the existing special allowance to be merged with Basic Pay.
In this scenario, it is the duty of serving work force to give pressure to unions not to accept this 2% load proposal , and stick to charter of demand.
In every settlement a twist , a back stabe is done by Big Bro at the last minute, and other unions seem to be helpless and join the treachery.
This should not happen this time also.
Send your views on loading, by SMS, Whatsapp message , e-mails, and letters to your union leaders.
Commenting, scolding, cursing unions after everything goes out of hand is if no use. 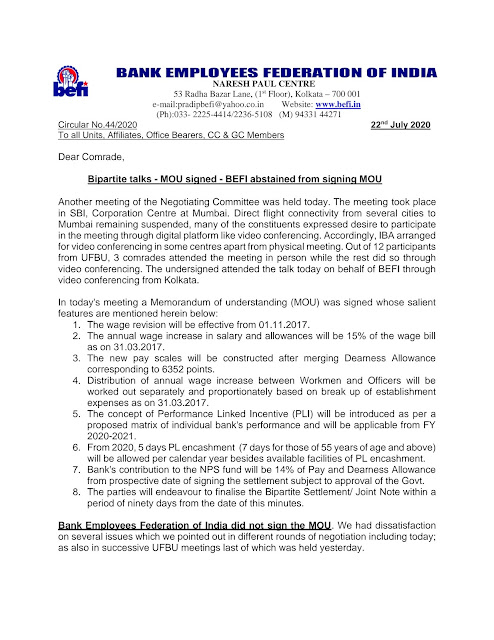 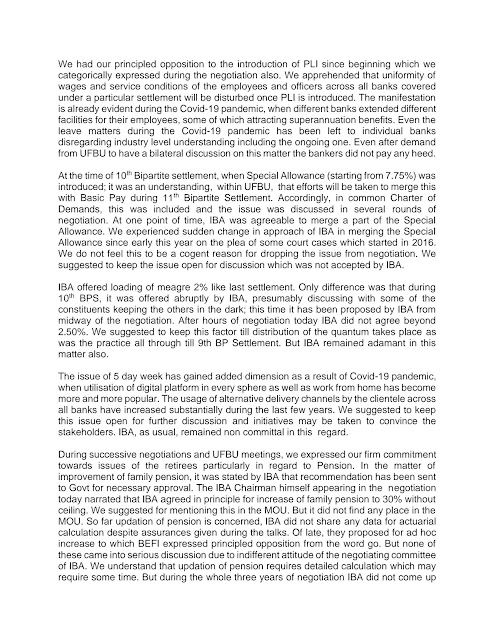 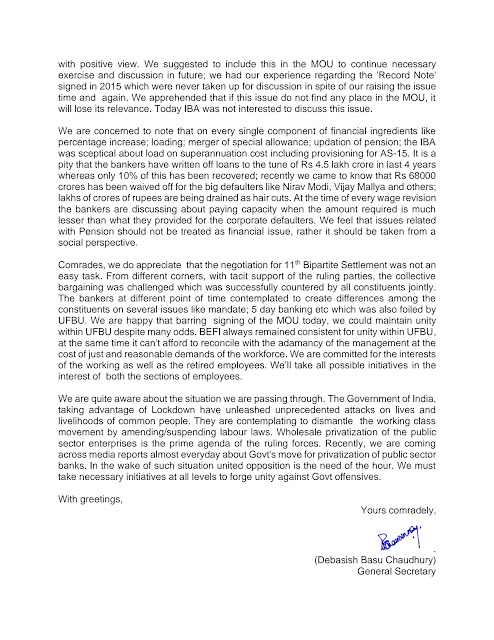 Whats happening? The parties to settlement are in two ways? Then How MOU have signed? Why BEFI is weeping like this, as a union they have to stop signing the MOU.

Speak the above words after volenterly comming out of ufbu.

What about 5 day banking

Spl.allowance not being merged with basic a great conspiracy of ufbu&iba.hopless settlement

11th bipartite is the great mistake of UFBU after 10th bipartite settlement.
It is worsest bipartite without pension updation, 5Days week and merger of special allowance. Shame shame to UFBU

Back stabbing is not by the big brother alone. But by all the constituents of ubfu. Had others United big brother would have become chota. Why not done. It is a strategy for taking credits for good features and shifting blame on negative ones. If befi does not sign they cannot sit in next negotiation. So they will meekly sign later as they did in the past. In 1979 just to increase clerical pay in one slab from rs.700 to rs 705 NCBE fought vehimently and achieved. Over a period enjoying more perks than management the fighting spirit is totally gone. After signing every settlement there Will be blame game only. No discerning bank employee will believe these leaders.