FinMin wants banks to get commitment from trade unions

The government has asked 10 public sector banks (PSBs) to curtail employee benefits, including industry-standard pay hikes, if these want to receive any capital.

The Centre wants these banks to sign a memorandum of understanding (MoU) with the employees’ unions to get a commitment on this. If the unions agree, benefits such as leave travel concessions and perks could go for a few years till the banks returned to health.

These banks had asked for capital from the government, some as little as ~500 crore. But the government is acting tough, as these have a huge bad-asset problem and their profits are dwindling.

According to sources, a letter, which the finance ministry has written to the banks, said capital allocation would be linked with measurable quarterly milestones on which all related parties — banks’ board of directors, management and employees — must commit.

Support in the form of capital would require a tripartite MoU between the government, the PSB concerned and its employees. The MoU would be a commitment to an agreement for a time-bound plan, starting with the financial year 201718. It would be monitored quarterly.

Temporary restructuring of employee benefits would be done only based on need. Any reduction or suspension in benefits could be reversed if the bank concerned successfully managed turnaround operations, said sources.

Senior bankers in some of these institutions confirmed they had received such a letter. A senior executive of a bank said the purpose of the proposed MoU was to have employees on board. “This is a commitment and not a legal provision to put blame on and basis for action against employees,” he added.

Sources said SBI Capital Markets, the investment banking arm of the State Bank of India (SBI), has been asked to advise on the terms of the MoU.

According to a senior union leader, they would explore the option of going on strikes if they were not satisfied with the terms of the MoU.

C H Venkatachalam, general secretary, All India Bank Employees’ Association, said employees were ready to cooperate for the effective turnaround of banks. However, unions and employees would not tolerate a vendetta or harassment. Banks have to be empowered to ensure effective recovery from defaulters, especially corporate borrowers, through legal means.

“The government wants the banks to sign the MoU with the unions to restrict economic benefits of employees. This is probably the government’s way of saying the employees of these banks deserve to be punished,” said a source.

Bank unions might find hurdles to their agitation plans. The P J Nayak committee has already suggested privatisation of PSBs. Union Finance Minister Arun Jaitley has expressed a desire to start privatisation with IDBI Bank. Besides, the government in July 2016 said it would capitalise only 13 banks, out of the 19 it owned, based on performance.

Bank unions were in a spot after the government gave a go-ahead to SBI to merge with its associate banks.

Such an MoU was not unprecedented. In 1998-99, the M S Verma committee report had suggested that banks with a return-on-asset ratio of less than one should be liquidated. Affected banks — Indian Overseas Bank, United Bank of India and Indian Bank — had to sign such an agreement with the unions. These banks had returned to health in three years. Then finance minister P Chidambaram used to preside over the board meetings of these banks and employee benefits were significantly curtailed.

The government is trying the same trick this time and the unions might have to oblige to save the banks from privatisation, sources said. 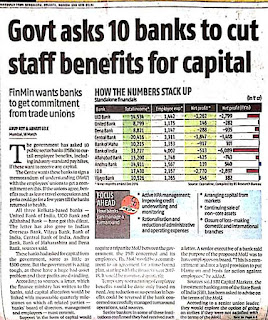 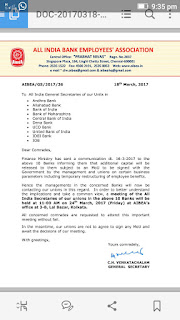 Govt cant take such a harass steps against bankers.If we are then why not other sector, on such parameters.

Inspite we are profit making ,bank profit is being eaten by hingh provisioning because of npa,which has incresed, for this govt policy decision and management is too responsible.we as a field worker has done our best for the welfare of society govt should never forget.whether it is PMJDY,PMSBY,APY and recentlt Demonetisation etc PSB's officer/employee has always kept organisarion at top priority.

Allready bankers are less paid as compare to their work with other counterpart working in different sectors.
When ita time to go for 11th bipertite govt has played a very good game agains emloyee of psbs we understand.but we will not be a mute spectator against our right ...

Above action from govt is first step towards merger of psu

Above action from govt is first step towards merger of psu

UBFU will power to negotiate has been
Decreasing and only want to sign the settlement at the mercy of IBA.
You all will see it in the final settlement. Be prepared for it.